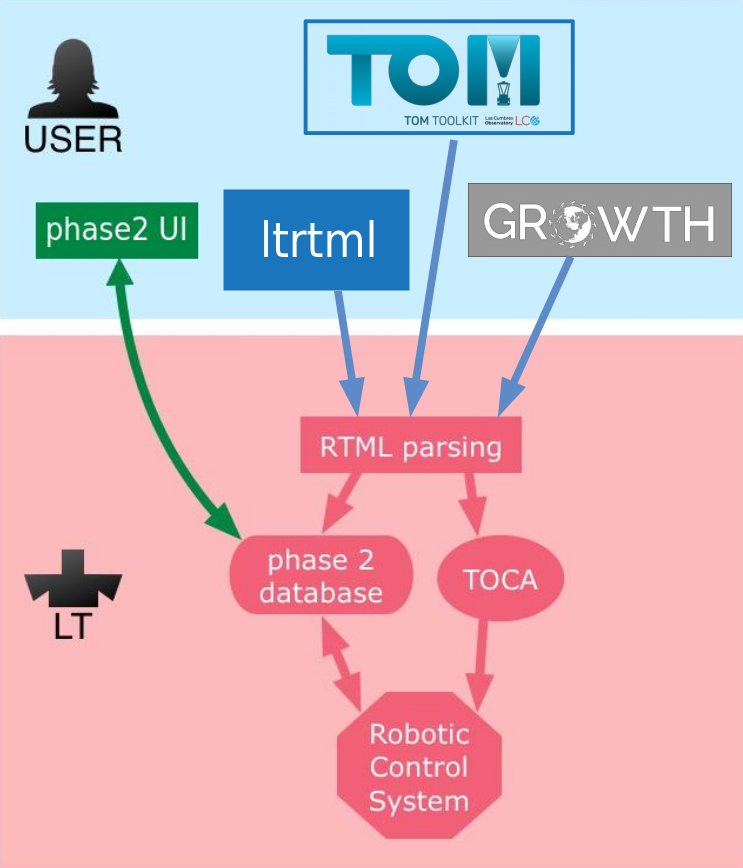 As an alternative to using the Phase2 Interface, the Liverpool Telescope is able to process observation requests using the Remote Telescope Markup Language" (RTML) protocol. This XML based language is used to remote-control telescopes, or to communicate with autonomous robotic telescopes. RTML is most powerful for integrating LT observations into automated systems, removing the requirement for each group to be entered by hand in the Phase2 database.

NOTE: Despite covering most use cases, users will still need to use the fully featured Phase2 Interface tool for observations requiring any of the following features;

RTML capability is currently available for the following instruments.

RISE is planned to be RTML enabled in the future.

We provide two different ways to use RTML to send your observation details to the LT. Like the Phase2UI, both of them insert the information straight into the phase 2 database. The advantage however is that they allow you to automate the Phase 2 process, particularly useful if you have automated pipelines for followup. The two RTML interfaces are:

Both RTML interfaces can also talk directly to the Target of Opportunity Control Agent (TOCA), the system that triggers the LT's rapid-response capability to interrupt the current observation and immediately observe your target instead. The LT already performs completely autonomous instant overrides for Gamma-Ray Burst alerts via a different protocol from the NASA Gamma-ray Coordinates Network (see GCN in diagram above), but a similar end result is also possible via RTML/TOCA.

Overrides can be very disruptive, and the ability to use the TOCA is restricted to only essential proposals. It is requested at the Phase 1 stage and approved by the TAC.

The RTML facility is available to all users who have TAC-awarded time allocations. Please contact us for more information on usage.