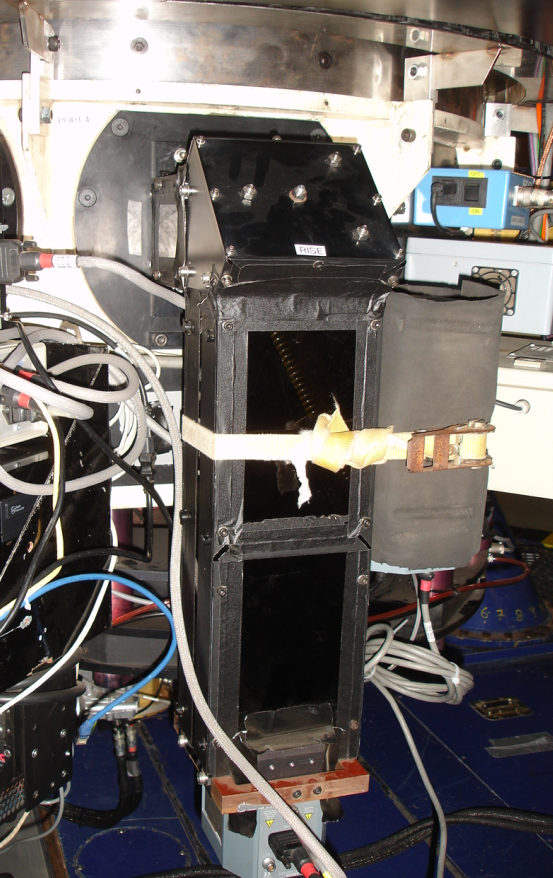 RISE is a fast-readout camera developed in collaboration with the Queens University Belfast for the precision measurement of transiting exoplanet timing. The camera optics were designed by John Meaburn. Mechanical design work was done at Liverpool JMU, and mechanical and software build done at QUB.

The CCD camera in use with RISE is an Andor DW485 which houses an E2V CCD 47-20 frame transfer device. 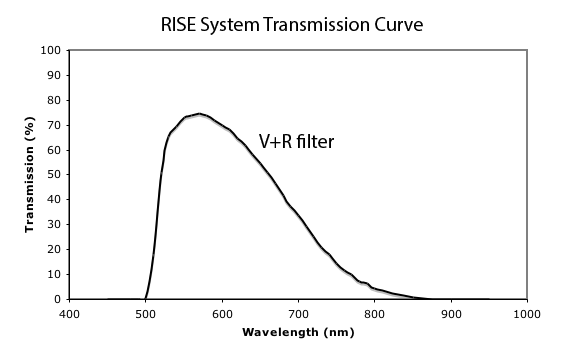 RISE uses a single fixed "V+R" filter made from combined 3mm OG515 + 2mm KG3 filters. A calculated transmission curve for the RISE system with this filter is shown at right.

Between July 2017 and January 2020, RISE used a 720nm longpass filter, which could be thought of as approximately "I+Z".


As the majority of RISE data are taken for the purpose of relative photometry using secondary standards within the field of view, no routine nightly photometric standards are obtained with this instrument. If you require standards you must request them explicitly in your Phase 1 proposal (and include the time needed for these in your time request); you should also upload observing groups for them in your Phase 2 submission.

The sensitivity of RISE is similar to that of IO:O (and RATCam before it) with an SDSS r'-band filter. Even so, those preparing proposals should use our Exposure Time Calculator as a guide to the signal-to-noise ratio expected with a given exposure time, seeing, sky brightness, etc.

RISE is, however, typically used with very short exposure times on bright targets, often with the telescope defocused to avoid saturation and to minimise uncertainties associated with flat-fielding. We STRONGLY RECOMMEND that users planning long groups (more than 10-20 minutes) submit a test observation to establish the best exposure time and telescope focus setting for their needs.

As a guide, on a 10th magnitude star in a 4 second exposure with 2x2 binning, the following has been measured in "typical" observing conditions:

Note that saturation occurs at around 40,000 counts with 2x2 binning.

The following plots illustrate the PSF diameter and peak count rate you can expect as a function of defocus. The diameters are derived directly from the optical prescription of the telescope and instrument optics. The relative peak height is derived empirically from data similar to the table above and must only be treated as a rough guide since the result is so dependent on seeing conditions.

Above: General guide to effect you may expect as a function of RISE defocus.

True integration on sky is about 18msec longer than the requested integration. The entire frame receives the same illumination, so relative photomtery between two sources in an image is unaffected by the 18msec excess integration.

The original science case for which RISE was designed demanded sub-second timing precision when determining the centroid of occultation events that lasted several hours. This is easily achieved with RISE. However the fact the camera can be read at faster than 1Hz makes it appealing for a variety of other high precision timing experiments. We here summarise the main factors that limit accuracy of the data time stamps. Please contact us if you wish to discuss the implication of these effects on your science or anything that can be done to enhance accuracy on specific observations.

For the benefit of observers performing long term monitoring we here summarize the dates of major hardware changes that could potentially leads to changes in photometric calibrations.

No filter-change or readout time overheads need be applied when applying for RISE time; a simple 60 second slew overhead and the universal 20sec initialisation overhead are all that are required. No filter changes are possible, and the readout time is negligible.

Guidelines on how to prepare observations are given in the Phase 2 web pages. Note in particular the instrument-specific User Interface Instructions. The phase 2 "Wizard" should always be used to prepare observations. Groups that can not be prepared with the wizard should be discussed with LT Phase 2 support. Note that LT staff do not routinely check observing groups, and that observing groups are potentially active as soon as they are submitted. Please do contact us if you have any questions about your observations.

In general we recommend 2x2 binning is used for all RISE observing due to the better linearity and cycle time in this mode. For bright targets you must be very careful of saturation and may well need to defocus the telescope.

Users are also encouraged to use MULTRUN exposures with RISE.