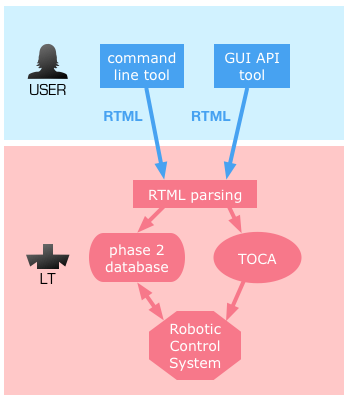 The low-resolution spectrograph SPRAT recently joined IO:O and IO:I as an instrument that can also be accessed by an alternative method — that in some cases can be faster, more convenient, and allow for immediate response to transient events (TAC permitting of course). This method is RTML.

Regular users of the Liverpool Telescope (LT) will be familiar with the standard method of setting up their observations, namely the Java-based Phase 2 User Interface or "Phase2UI".

This user interface, accessible only to registered users of the LT, enables them to manually define their observation details: the coordinates of their targets; the timing of their observations; the instruments and filters to be used; and the number and length of the exposures. The interface transmits this information directly to the telescope's Phase 2 database, which is polled by the robotic scheduler repeatedly through the night between observations to decide what to observe next — i.e. to match the best observation to current conditions.

If using the Phase2UI at night, the new or updated observation group will be considered by the scheduler as soon as it makes its next poll. So it could potentially be chosen and observed mere seconds after the "Submit" button is pressed.

What may not be so widely known is the alternative way of entering observation details, which in some cases is faster and more convenient. It uses the "Remote Telescope Markup Language" (RTML) protocol*, which was invented in 1989 at the University of California at Berkely, USA. It's a special dialect of XML (Extensible Markup Language), and is used to remote-control telescopes, or to communicate with autonomous robotic telescopes.

We provide two different ways to use RTML to send your observation details to the LT. Like the Phase2UI, both of them insert the information straight into the phase 2 database. The advantage however is that they allow you to automate the Phase 2 process, particularly useful if you have a lot of targets or observation groups to enter. The two RTML interfaces are:

We have in the past provided a third interface: bespoke webpages created by us for users who do not want to program with the command-line tools or API. These restricted-access pages contained HTML forms tailored to a user's specific observing programme. They generated observation details in RTML and transmitted directly to the LT. These pages are now being phased out.

[Edit 16 Jan 2017: The RTML facility currently only allows upload of new observation groups. Adding the functionality to download, edit, re-upload and delete groups is on the wishlist for future development.]

Both RTML interfaces can also talk directly to the Target of Opportunity Control Agent (TOCA), the system that triggers the LT's rapid-response capability to interrupt the current observation and immediately observe your target instead. The LT already does this for Gamma-Ray Burst alerts via a different protocol, but it's also possible via RTML.

As you can imagine, overrides can be very disruptive. Therefore permission to have TOCA capability has to be requested at the Phase 1 stage and approved by the TAC.

RTML capability is being phased in across the LT's suite of instruments. IO:O and IO:I have been available for RTML response for some time, and now SPRAT has been added to the list. FRODOSpec and RISE are next, and we hope to have them available soon.

The RTML facility is available to all users who have TAC-awarded time allocations. Please contact us if this sounds interesting, and we will provide full user instructions.

* Not to be confused with the entirely different proprietary programming language used exclusively by Yahoo!'s web hosting services – their RTML stands for "Robert T. Morris Language".