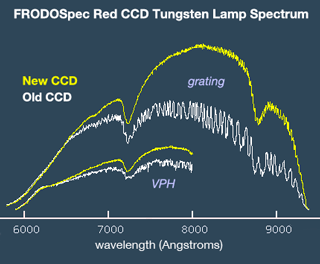 FRODOSpec allows the simultaneous spectrographic observation of the red and blue parts of the optical spectrum, by separating the incoming beam of light with a beam splitter and sending the two beams down separate "arms", each with their own optics and CCD detectors. What's changed is the "red arm"'s CCD detector; the original unit was replaced with a deep depletion version during the most recent site maintenance visit in October.

Tests made afterwards during recommissioning reveal that throughput has increased by as much as 100% for some wavelengths. The plot above right shows the spectra of FRODOSpec's calibration tungsten lamp made with the old and new CCDs. Throughput is improved for all wavelengths and shows greatest increase of ~100% around 9000 Angstroms.

The plot also shows the great reduction in fringing with this new CCD. Fringing is caused by light reflecting inside the CCD itself - slight variations in substrate thickness create an interference pattern that for CCDs is most visible in the red end of the optical spectrum (see Newton's Rings for a full explanation of this effect). Although the fringe pattern is largely fixed from one observation to the next and so can be compensated for to some extent, it can still complicate data analysis. The new CCD however has a different layer structure designed to prevent fringing. This is readily apparent in the closeup FRODOSpec red arm images at right; fringing is greatly reduced in the new CCD.

Overall, this CCD upgrade coupled with the telescope secondary mirror realuminisation means more objects are now within range of FRODOSpec than ever before.