The middle of June saw the Liverpool Telescope (LT) go offline for two and a half weeks, to successfully undertake important scheduled maintenance. The main item in the to-do list was to realuminise the telescope's primary and secondary mirrors. This difficult task was performed outstandingly, and the results were clear to see, in that the throughput of the telescope was doubled - i.e. twice as much light now enters the telescope's detectors as before. 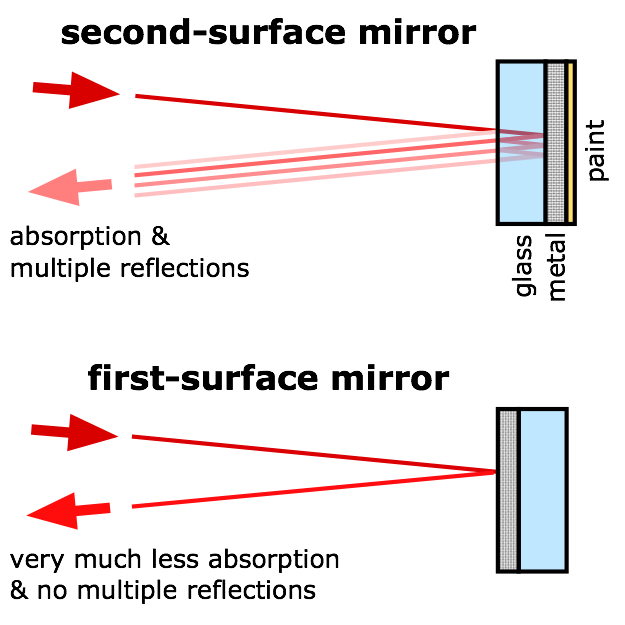 "Normal" household mirrors that we're used to every day have their reflective (usually silver) layer deposited chemically on the back of a sheet of glass, and then another layer of paint is applied on top. This sandwiches the metal between glass and paint, protecting it and making sure it stays reflective for the lifetime of the mirror. This is what's known as a "second surface" mirror, because the reflecting layer is on the second surface away from the viewer, i.e. the back of the glass. The first surface on the other hand is the front of the glass.

For everyday use this kind of mirror is fine, but you wouldn't be happy using it in a telescope. That's because light has to pass through the glass twice, once on the way in and again on the way back out. The glass not only absorbs some of the light (which you don't want when looking at faint objects), but also causes multiple reflections which hamper sensitive measurements.

That's why astronomers prefer to use "first surface" mirrors in their telescopes instead. As you may have guessed already, this is where the metal is deposited on the front of the glass. The metal in this case is usually aluminium, and it's evaporated onto the glass in a huge vacuum chamber. The layer ends up around 350 atoms thick, which for aluminium is about 100 nanometres, about the same thickness as gold leaf and 160,000 times thinner than kitchen foil.

This fragile coating is exposed to the air and any contaminants that might fall on it, but that disadvantage is far outweighed by the fact that light does not have to pass through any glass in front, resulting in a much clearer and brighter image. We should not leave out the even more important fact that the glass substrate itself is carefully shaped and polished to a precise figure to focus the light in the exact manner required. This shaping is by far the most difficult part of telescope mirror manufacture.

Over time, dust (especially "calima" blown from the nearby Sahara Desert) builds up and adheres to the aluminium, degrading its reflectivity. Periodic cleaning is not 100% perfect, and eventually after several years it is better to realuminise the mirror instead. This involves taking the mirror out of the telescope, and removing the aluminium with acid. The glass "blank" is then carefully cleaned, and put inside a huge vacuum chamber where a new layer is evaporated onto it in a carefully controlled manner.

Very conveniently, one of the many telescopes on the mountaintop has their own realuminising plant. The William Herschel Telescope (WHT) stands just 500 metres away from the LT, and its vacuum chamber was built to accommodate their 4-metre diameter primary mirror. The WHT staff very kindly agreed to realuminise our mirrors, and provided expert crane operators and equipment to help us move our sensitive optics over to their site.

The LT's primary mirror is a precision-crafted disc of glass two metres in diameter and 20cm thick, weighing in at 1.3 tonnes. Extracting such a large and heavy piece of sensitive equipment from the base of the LT, without scratching it or causing any damage at all, was a particularly tense time. As expected though, on-site personnel performed the task expertly. They were site manager and senior mechanical engineer Stuart Bates, mechanical engineer Mark Crellin, LT site engineer Dirk Raback, and crane operators and engineers from the WHT. The primary mirror was slid out from underneath the telescope in its mirror cell and immediately covered in lint-free tissue to protect it and prevent dangerous reflections. It was then carefully lifted off the mirror cell into a special padded transit box, and then hoisted out of the top of the open enclosure.

Meanwhile, the secondary mirror was also earmarked for realuminisation. This was the first time the secondary had been treated since the LT was built in 2003. The reason for the delay was that the secondary had been coated with a thin layer of silicate to protect the aluminium, and until recently, removing this layer to get at the metal without damaging the glass substrate underneath was a prohibitively expensive and difficult task. 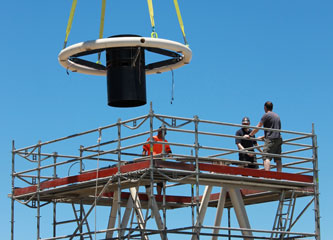 Dirk Raback, Stuart Bates and Mark Crellin at the top of the telescope.
(Photo © 2015 N. Clay)

This year however, the very expert who applied the silicate coating all those years ago was available to remove it again in person. David Jackson is now retired, but was happy to come to La Palma and help. So, the telescope's top end ring was lifted off the and placed in a special holding rig. The mirror was then removed and placed in another transit box to be taken to the WHT's plant along with the primary.

At the plant, the primary's aluminium layer was carefully removed with powerful acids under strict safety supervision. After that, the glass was washed and carefully dried to ensure not a speck of dust remained on the surface. Finally, the glass "blank" was placed in the WHT's huge realuminising chamber. 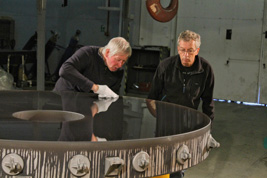 Meanwhile, under the expert guidance of David Jackson, Jürg Rey, head of operations at the Isaac Newton Group of telescopes, was able to successfully remove the silicate layer on the secondary mirror without damaging the glass underneath. Now the silicate was gone, the aluminium layer underneath could be removed in the same way as the primary. The secondary glass blank was then cleaned, and it took its place next to the primary in the WHT's cavernous aluminising chamber. 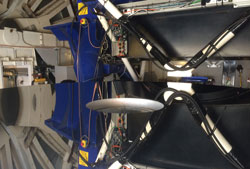 Aluminising went without a hitch, and the next day the equally careful task of transporting the freshly-coated mirrors back to the Liverpool Telescope began. On-site, the secondary was replaced in its mounting and the top-end ring hoisted back onto the top of the telescope. The 1.3-tonne primary in its transit box was lifted back into the enclosure, then taken out of the box and placed to submillimetre precision back onto the pneumatic actuators in the mirror cell.

Over the next two days the rest of the telescope was put back together and all instruments remounted, in time for LT Director Iain Steele, Operations Scientist Jon Marchant and PhD student Helen Jermak to fly out from Liverpool to undertake recommissioning.

The telescope had had its major optical components dismantled and reassembled, and all instruments had been removed and remounted. So from 27 June to 1 July, a full end-to-end test of the telescope's electrical, hydraulic, pneumatic and optical systems was made, along with similar tests for each instrument. This lengthy sequence of tests proved the telescope was operating nominally and that all of its instruments were in focus and working properly.

One of the first things that became apparent during recommissioning was that the throughput of the telescope had improved by a greater margin than anticipated. Helen Jermak performed tests through IO:O filters to show that on average, twice as much light reaches detector sensors than before, depending on filter. The greatest increase (a factor of 223%) is in the SDSS-U filter, while the least increase (a factor of 163%) is in SDSS-Z. This general trend of greatest increase in the blue part of the optical spectrum is a sign that it was finally being able to realuminise the secondary mirror that caused most of the improved throughput.

Realuminising was not the only task on this maintenance visit. DevOps engineer Neil Clay also came to site and undertook timely and crucial maintenance on the telescope's entire IT system, as well as repairs and maintenance to the weather mast and its sensors. The 1-degree FOV Skycam Z was overhauled too, its 20cm primary mirror being realuminised along with the LT's. Being so relatively small, there was no problem finding room for it in the WHT's huge aluminising chamber.

Summing up, the three-week programme of site work and support from the UK was very successful. A big thank you goes to LT staff both on-site and on backup in the UK, Mark Crellin, David Jackson, Helen Jermak, and Jürg Rey and the WHT staff.