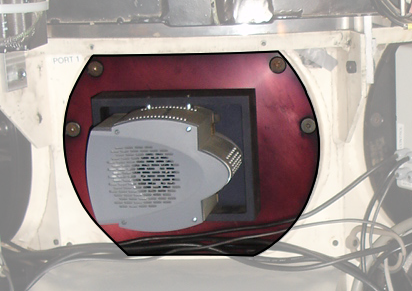 IO:THOR was decommissioned at the end of February 2014. The information presented here is for historical purposes only.

IO:THOR (or simply THOR) was part of the IO suite of instruments, and was a fast-readout optical camera with a 2.25x2.25 arcminute field of view. It was only partially commissioned on the telescope and was therefore not available for general use. Its specifications are listed below.

Saturation of the CCD electronics occured at 16,000 ADU. Users had to always keep counts well below 15,000 ADU per pixel. In contrast to a traditional CCD, saturation can permanently degrade an electron-multiplying amplification register. It was therefore important that observers both carefully considered their targets (and surrounding field) and also inspected their data promptly so that they could cancel future observing groups in the event that an accidental saturation occurred.

As a simple rule of thumb, a 13th mag star saturated unbinned THOR at EMGAIN=100 in 10 seconds. For binning 2x2 this scaled as you would expect (i.e. factor ×4), so a 14.5 mag star saturated with EMGAIN=100 in 10 seconds. This was of course highly dependent on seeing and whether a source was extended or not. Remember also that the extremely broad passband of THOR could easily vary these estimates by a factor of two depending on the spectral energy distribution (SED) of the source.

To reduce the risk of saturation, the Phase2 User Interface Validator declared a group FAILED for integrations >10sec or if the sky brightness was set to "6 mag or brighter".


In its standalone, fast-imager configuration, THOR operated essentially in white light. The blue cut-off was defined by a fixed Schott OG515 filter while the red cut-off was set by the CCD QE. This gave an approximate pass-band of 520 - 900 nm, which covered the red half of the visible window; V,R,I or r',i'

Colour corrections for such a broad filter were highly dependent on the spectral energy distribution (SED) of the source. However, for typical stellar sources we derived the following colour terms with respect to both Landolt and SDSS magnitudes. The best overall match to any single broad-band filter was SDSS-I.

Colour equations are given for EM gain = 100 [the Zeropoint for EM gain = 20 is appended in square brackets]. Contrary to other instruments on this web site, the zero-points are here quoted at 1 ADU/sec, not 1 photo-electron/sec as we normally use.


The maximum frame rate depended on binning and windowing, but there were two observing modes for IO:THOR which also significantly affected the frame rate and integration times achievable:

This mode took a defined number of frames of a defined integration. For example, "3 x 5 sec" took three 5sec integrations.

This mode took a stream of exposures, each with a defined integration time; the mode obtained as many frames as it could in a defined total run time. For example, if you requested 1 sec exposures for a 20 sec duration then THOR took as many 1 sec exposures as it could before 20 sec elapsed. This could result in only nineteen frames being obtained, depending on the overheads.

An automated data reduction pipeline ran daily on any data that was acquired. The pipeline removed basic instrumental signatures (bias, dark, flat) from the images. Raw and flat-fielded images were distributed to the observer in the normal way (i.e. via the Quicklook and Recent Data pages, or through the Archive). However, this pipeline currently only ran on full-frame, unbinned images.

No routine photometric standards were obtained with THOR; users were responsible for scheduling their own standards.