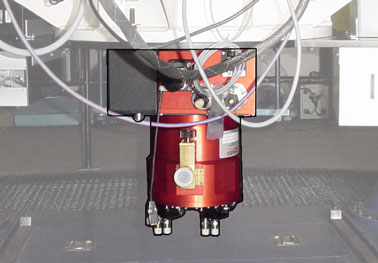 SupIRCam shown mounted on the LT, minus its coolant pipes.

SupIRCam was decommissioned at the end of July 2010 following a failure of the cooling system. It will be replaced by IO:I, scheduled for late 2014.

2006
The camera was removed from the telescope in August 2006 and returned to the UK for improvements to the cooling and electronics systems. It was refitted onto the telescope in February 2007. Overall these changes resulted in a reduction in read-noise, removal of the variable bias level and better behaviour of hot pixels preventing them affecting neighbouring cells.

2007
On 27th June 2007 operations with SupIRCam were suspended due to failure of the mirror deployment mechanism. Operations recommenced in September 2007 following a servicing mission.

2010
On 11th July 2010 the cooling system failed again and the decision was made not to attempt another repair but instead focus effort on the construction of our new infrared-optical camera IO. The instrument was therefore effectively decomissioned at that point, and removed from the telescope in September 2010.

There were no cooled optics in the instrument, so only the J and H band filters were available for use. Transmission curve tables can be downloaded by clicking on the filter names below. Column 1 in the table is wavelength in Angstroms, column 2 is transmission in percent.

Standards were spaced approximately every few hours of RA and were observed in all bands every three hours by the robotic control system. Click on a name to bring up a 2MASS J band image of the field. North is at top, east to the left.

All SupIRcam data since April 2007 was run through a data reduction pipeline before being distributed to users. This pipeline performed linearity correction, dark current subtractions, flat-fields and sky subtraction. It is important to note that the sky image was generated by building a median stack of all the dither frames (suitably smoothed) within a single observation, typically either 5 or 9 frames. If a large extended source was in the field, it was possible for it to be included in the sky image and therefore some small fraction of its flux to be subtracted from each image. The sky image used was included in a FITS image extension called SKY within each distributed image for user inspection, allowing users to remove the sky subtraction stage from the reduced image if needed.

By contrast, the flat field used in the reduction was generated from a very large sample (many thousands) of contemporary observations and so was not affected by that problem (the flat field stability being much greater than the sky stability).

Data which predated the availabilty of this pipeline (i.e., prior to April 2007) are still only available as raw data. They were not loaded into the main data archive but may still be downloaded from Unloaded Data.

Only set exposure times were available, of 1, 2, 5, 10 and 20 seconds. Because the dither overhead was currently large (20 seconds per dither position), it was better to have fewer, longer exposures within the constraints of saturation and obtaining sufficient dither positions to allow good sky subtraction and flat field creation. For most targets individual exposure times of 20 seconds were recommended.

There were four dither patterns, selected by option number. There was no overhead for filter changes.

Obtain J band photometry of a 14.8 magnitude object in Bright/Average conditions at SNR=100: