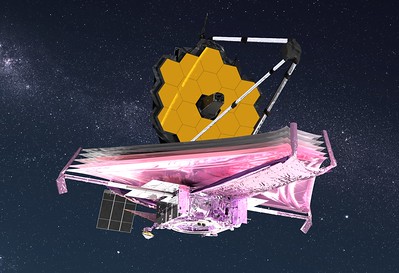 This article adapted from the JWST item on the New Robotic Telescope site.

It's well-known that the LT is designed to observe transient natural sidereal phenomena (e.g. supernovae, gamma-ray bursts, optical counterparts of gravity wave events) and non-sidereal targets (near-Earth asteroids and comets). However, it can also track some artificial satellites and spacecraft too, one example being the Gaia space observatory. Since its launch in 2013, Gaia has been tracked by the LT to monitor its position accurately in its halo orbit about a special position in space known as the second Sun-Earth Lagrange point (L2).

This position is one of five Lagrange points in the Sun-Earth co-rotating orbital plane where the gravitational forces of both bodies balance each other. A spacecraft placed at any of them needs very little orbit correction fuel to maintain its position relative to Earth. L2 lies ~1.5 million kilometres "behind" the Earth as seen from the Sun, about four times further away than the Moon. That area is becoming an increasingly-preferred location for space observatories. From L2 (or a halo orbit around it) both Earth and Sun appear close together, so it's much easier to thermally shield temperature-sensitive telescopes from both bodies.

A few weeks ago one of the most exciting telescope-related events of 2021 was the launch of the James Webb Space Telescope (JWST). It began its journey with an accurate launch into L2 transfer orbit at 12:20UT on 25th December 2021, and was observed by the LT that night. By then JWST was 139,000km above the Atlantic Ocean, and still moving at over 2.1 km/s relative to the Earth's centre. 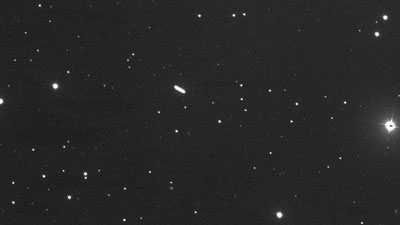 Top: The JWST is the streak near the centre of this 60-second LT image taken early 26th December 2021. Bottom: Animation of ten 10-second LT images of JWST, taken on 11th January 2022. See text for more details of both images. Credit: LJMU/LT/J.Marchant

The LT imaged JWST again on 11th January 2022 in a sequence of ten 10-second images. By then it was 1.14 million kilometres away and considerably slower, moving at just ~300 metres/second. Both image sets featured here were taken using the LT's IO:O instrument, the facility's main workhorse imager.

JWST is a revolutionary telescope, and astronomers and engineers across the world have waited patiently for its completion and launch for many years. Because they're located outside Earth's atmosphere, space observatories like the Hubble Space Telescope (HST) and JWST avoid the filtering and turbulent effects of the atmosphere and obtain the best view of the Universe for a telescope of that size.

The HST with its 2.4-metre primary mirror has provided astronomers with incredibly deep images of distant galaxies, but JWST will have a 6.5 metre mirror, capable of catching more photons and therefore probing even further into the depths of our Universe.

The JWST will look back over 13.5 billion years at our Universe in optical and infrared wavelengths and explore the formation of the first stars and galaxies. As JWST is designed to allow for measurements at infrared wavelengths, it is perfectly primed to see through the dust enshrouding many objects in the Universe such as stars and planetary systems. JWST will also explore distant exoplanet systems and objects within our own Solar System.

At time of writing, JWST has successfully deployed its sunshield and primary mirror, and is on course for starting its manoeuvre on 23rd January to enter L2 halo orbit. This rocket burn corrects any residual trajectory errors and adjusts the final L2 orbit. Due mainly to the accuracy of the launch however, less propellant will be needed for midcourse corrections than expected. The extra fuel remaining can therefore be used for stationkeeping and momentum management/attitude control instead, effectively extending JWST's stay at L2 from its original estimate of maybe 10 years to perhaps as much as 20 years.