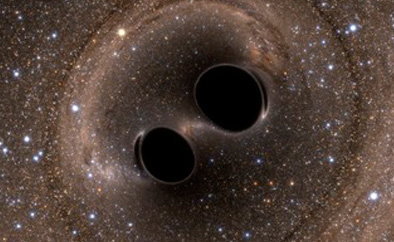 Researchers at Liverpool John Moores University's (LJMU) Astrophysics Research Institute (ARI) using the Liverpool Telescope (LT) were actually among the first to use new gravitational wave science, before the recent announcement by the USA's Caltech and MIT-run Laser Interferometer Gravitational Wave Observatory (LIGO) that they had made the first direct detection of gravitational waves.

Recognised as world leaders in this field, the ARI was asked to participate in a global study using gravitational wave astronomy months before the LIGO revealed gravitational waves had been detected. LIGO made the detection in September and a global collaboration of astronomers was asked to search for the merger of two neutron stars - a catastrophic and explosive event which should be detectable by the world's major telescopes. The LIGO detector gives only an approximate position, so astronomers were required to search a huge area of sky to find the light from the explosion.

The team from LJMU's Astrophysics Research Institute was led by Professor Iain Steele and Dr Chris Copperwheat and one of the many telescopes deployed in the search was the Liverpool Telescope, which used the SPRAT spectrograph, built by LJMU PhD Student Andrzej Piascik, to characterise candidate detections. A paper was published in the Astrophysical Journal giving a complete overview of these observations.

“Nevertheless, the exercise was an important test of the capabilities of the astronomical community to coordinate and perform the challenging observations required to follow an event such as this one. We believe there are many more neutron star binaries in the universe than black hole binaries, so given that LIGO has proved its capabilities, the detection of a neutron star merger is now only a matter of time.

“The detection of such an explosive event and the observation of the associated light is the next milestone in this new and transformative field of gravitational wave astronomy.”

Over the next few years the LIGO detectors will be complemented by additional detectors currently under construction around the world, and the combined array should reach full sensitivity by around 2022, at which point astronomers are likely to be able to detect hundreds of gravitational wave events every year.

LJMU is currently developing a new, larger robotic telescope, codenamed Liverpool Telescope 2, which is also expected to come into operation in 2022. One of the core science topics for Liverpool Telescope 2 is gravitational wave astronomy, and the new facility will enable LJMU's Astrophysics Research Institute to play a major role in exploring this new frontier.

Professor Chris Collins, Head of the ARI, added: “It is hugely exciting that we have started doing gravity wave science with the Liverpool Telescope. The recent LIGO results open the way for astronomers to study those energetically violent events in the Universe that give rise to gravity wave ripples."

This story was adapted slightly from that which appeared on the LJMU News site on 11 March 2016.