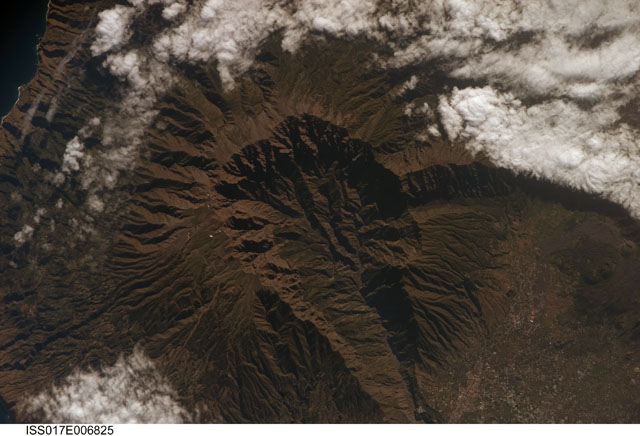 NASA photo ISS017-E-6825 taken from the International Space Station on 13th May 2008, at an altitude of 335 km. Image courtesy of the Earth Science and Remote Sensing Unit, NASA Johnson Space Center.

Prompted by the fact that UK astronaut Tim Peake is currently on board the International Space Station (ISS) which regularly flies over the Canary Island of La Palma where the Liverpool Telescope (LT) is situated, Liverpool John Moores University PhD student Helen Jermak asked Tim via Facebook if he could take a picture of the observatory from his rather unique vantage point.

The European Space Agency (ESA) Press Office were kind enough to reply that it's already been done - not necessarily by Tim, but by other ISS and Space Shuttle astronauts over the years, and they're all on a NASA public archive and available for free download.

The fully-searchable archive is at the Gateway to Astronaut Photography of Earth, which provided the picture above and contains many other photos of La Palma and the observatories on the north rim of the 6 km-wide Caldera de Taburiente.

Looking closely it's possible to pick out the LT and every other major facility at the Observatorio del Roque de Los Muchachos (ORM). The brightest speck of white by far is the observatory building housing the 10-metre diameter Gran Telescopio de Canarias, currently the largest single-aperture optical telescope in the world.

These pictures were all taken manually by astronauts, as opposed to automatically by Earth-observation satellites. The difference is technically rather small - they're both pictures from space - but psychologically it's very distinct. These are pictures taken by human beings who saw something interesting from the window of their vehicle and thought it would make a good picture to show the folks back home. Basically they're "holiday snaps", made with exactly the same hand-held cameras any one of us can buy from a shop — but quite literally taken from the window of a spaceship. As little as one human lifetime ago you could have based an entire science fiction story on this, an act which today passes almost unnoticed.