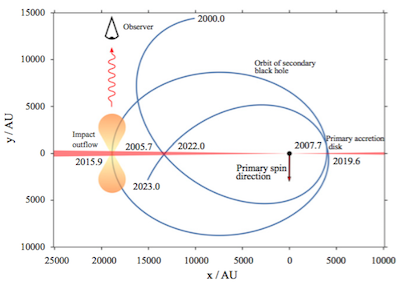 Diagram of the relativistically-precessed orbit of the secondary black hole about the much larger primary. See main text for details.
Credit: Valtonen et al, 2016.

The Liverpool Telescope (LT) recently took part in a ground-breaking campaign to accurately measure the rotational rate of one of the most massive black holes in the universe: the powerhouse behind blazar OJ287. Details behind the discovery are given in a paper in the Astrophysical Journal Letters entitled "Primary Black Hole Spin in OJ287 as Determined by the General Relativity Centenary Flare" by M. J. Valtonen et al (2016).

Quasi-stellar radio sources, or "quasars" for short, are the very bright centres of distant galaxies which emit huge amounts of light, via relativistic jets due to the accretion of large amounts of matter onto their massive black holes. When the jet is pointed toward the observer, the source is called a "blazar". From observations dating back to 1891, the particular blazar "OJ287" has been seen to outburst optically roughly every 12 years. More recent studies have shown that these outbursts actually have double peaks.

Prof. Mauri Valtonen of University of Turku, Finland and his collaborators developed a model to explain the outbursts: two black holes orbiting each other with a period of 12 years, interacting every orbit. The model states that one black hole (the "primary") is ~200 times the mass of the other (the "secondary"), and has an accretion disc. The secondary is in a large very elliptical orbit about the primary, and the plane of its orbit is inclined to that of the accretion disc, so it makes two crossings of the disc every orbit. Each time the secondary punches through the disc, the material it encounters is heated up to very high temperatures. This heated material flows out from both sides of the primary accretion disk and thermally radiates strongly for a few weeks.

The thermal outbursts can be used as good markers to pinpoint the times when the secondary crosses the plane of the primary's accretion disc. This is useful because Einstein's General Theory of Relativity says the secondary's orbit should precess, at a rate that depends mainly on the two black hole masses and the rotation rate of the primary.

The Liverpool Telescope Gets Involved

The model also predicted that the next twin-peaked outburst would occur around 25 November 2015, ironically the 100th anniversary of Einstein's General Theory of Relativity. An international observing campaign campaign was set up, calling on observatories from around the world - including the Liverpool Telescope.

Countdown to the Next Event 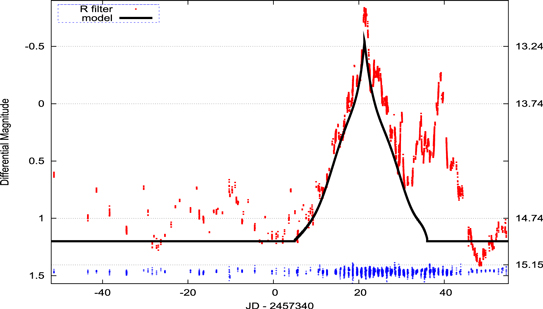 OJ287 has actually been observed by the LT since 2011, and was more closely monitored from September 2015 as part of the leadup to the predicted outburst. When the increase in flux began in late November 2015, PhD student Helen Jermak, the Principal Investigator of proposal JL16A08 using the RINGO3 polarimeter on the LT, was prompted to increase the cadence of the OJ287 monitoring observations from every 3 days to hourly, to closely follow the "flare" of this outburst.

The LT automatically tracked the source many times per night, taking photometric and polarimetric data with RINGO3. The polarimetry taken during the second peak allowed the authors to study the effect of the interaction between the secondary black hole and primary accretion disc on the primary's jet.

Thanks to the valuable contribution of this data plus that of other observatories, Valtonen and his co-workers were able to directly measure the rotation rate of the more massive black hole to be one third of the maximum spin rate allowed in General Relativity.

The collected data from this latest outburst also allowed the team to confirm the loss of orbital energy to gravitational waves within two per cent of General Relativity's prediction. This provides the first indirect evidence for the existence of a massive spinning black hole binary emitting gravitational waves.

This is encouraging news for the Pulsar Timing Array efforts that will directly detect gravitational waves from such systems in the near future. Therefore, the present optical outburst of OJ287 makes a fitting contribution to the centenary celebrations of General Relativity and adds to the excitement of the first direct observation of a transient gravitational wave signal by LIGO.