False-colour slitless spectrum of Cat's Eye nebula (NGC 6543). This image was taken using the SPRAT spectrograph in "slitless" mode, where its slit is out of the way, but the grating and prism remains in the telescope beam, producing wavelength-shifted imagery. Image derived by Robert Smith from engineering data created during final SPRAT commissioning. © 2015 LJMU

The latest Liverpool Telescope public data release consisted of 118,474 new files, including both spectra and images spanning from the ultraviolet u’-band to the H-band infrared, bringing the total number of observations freely available from the archive to over two million.

There are now over 13,000 hours’ worth of observing data available, 9960 hours imaging and 1636 hours spectroscopy. Most targets have been observed a few times, going back to the start of LT operations in 2004, but some fields, such as the photometric standards, have time series consisting of thousands of observations. 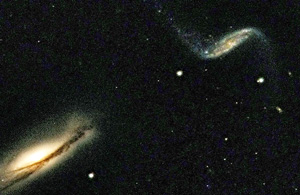 Public access to research data is important for both data mining of historical observations and wider community engagement. This is especially true for a time domain facility where there is a wealth of information stored in the time series data that come from the Liverpool Telescope. We therefore invest a lot of effort in maintaining the LT data archive and encourage all those interested in time domain astrophysics to make use of the archive in their research. Please contact us if there are any ways in which we can help increase the impact of this facility on their programmes.