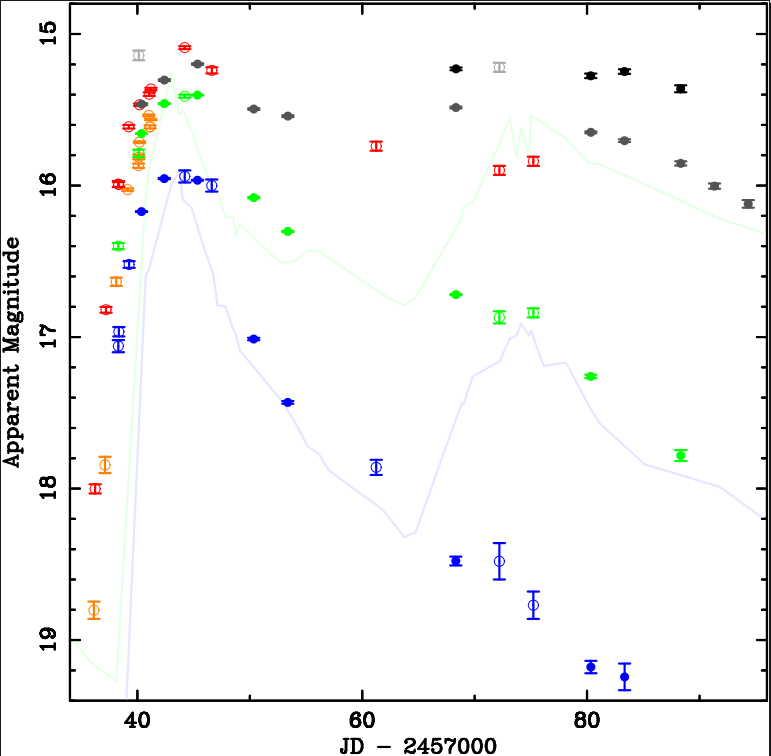 Light-curves obtained by imaging M31LRN 2015 over a number of weeks through seven different filters. Data from the LT (filled circles) are combined with observations from other telescopes (open circles). The x-axis shows time in days; the y-axis is the brightness of the nova, in magnitudes.

In January 2015 the discovery of a possible classical nova in the Andromeda Galaxy (M31) was announced by the Global MASTER Robotic Network, a Russian-led network of telescopes dedicated to time domain astronomy. Classical novae are not particularly rare events, with around 30 observed each year in M31 alone. However, as the LJMU team of Dr Steven Williams, Dr Matt Darnley, Prof. Mike Bode and Prof. Iain Steele were soon to realise, the object in M31 was a much more unusual object. By following the outburst with the Liverpool Telescope's new spectrometer SPRAT and its work-horse imager IO:O, Williams and co. demonstrated that the outburst - dubbed M31LRN 2015 - was not a classical nova, but was instead a luminous red nova (LRN), a much less common class of stellar transient.

Classical novae are thought to be associated with binary star systems. They result from a burst of nuclear fusion on the surface of a white dwarf (a very compact dense star about the size of the sun), as material spirals down onto the white dwarf from its larger companion star. By comparison, the nature of luminous red novae is still uncertain. A growing body of evidence suggests that they may be the result of two stars merging together, causing a sudden explosion and a very dramatic brightening of the system.

The study of these systems as a class of transient only really began with the 2002 outburst of V838 Mon in our Milky Way galaxy, when astronomers noticed that it behaved differently to classical novae. The characteristics of the V838 Mon outburst event were found to be similar to the luminous red nova identified in M31 in 1988, and to V4332 Sgr, a similar type of outburst which occurred in the Milky Way in 1994.

The first SPRAT spectrum of M31LRN 2015, taken three days after its discovery and before the outburst had reached peak brightness, shows that it initially exhibited strong hydrogen emission lines (labelled Hα below). These hydrogen lines weakened over time and the spectra then began to show various absorption features, its spectrum resembling a cool supergiant!

The outburst was also followed with IO:O using different coloured (B, V, i' and z'-band) filters. These observations showed that after reaching its peak brightness, the luminous red nova faded quickly in the bluer filters, but remained bright in the redder filters for several weeks.

An IO:O image of the outburst was used to precisely determine the position of the system. The team then searched the Hubble Space Telescope data archives and found an image of the object, taken in 2004, prior to the recent outburst. The data show that the likely progenitor star of M31LRN 2015 was consistent with a red giant. Interestingly, the object appears to show evidence of hydrogen emission many years prior to the outburst, although the source of this emission is not clear. Further observations of this and other systems are certainly warranted. Astronomers clearly have some way to go before these enigmatic objects are fully understood.

All of the LT observations of M31LRN 2015 and the archival study of its progenitor have recently been published in Williams et al. (2015). 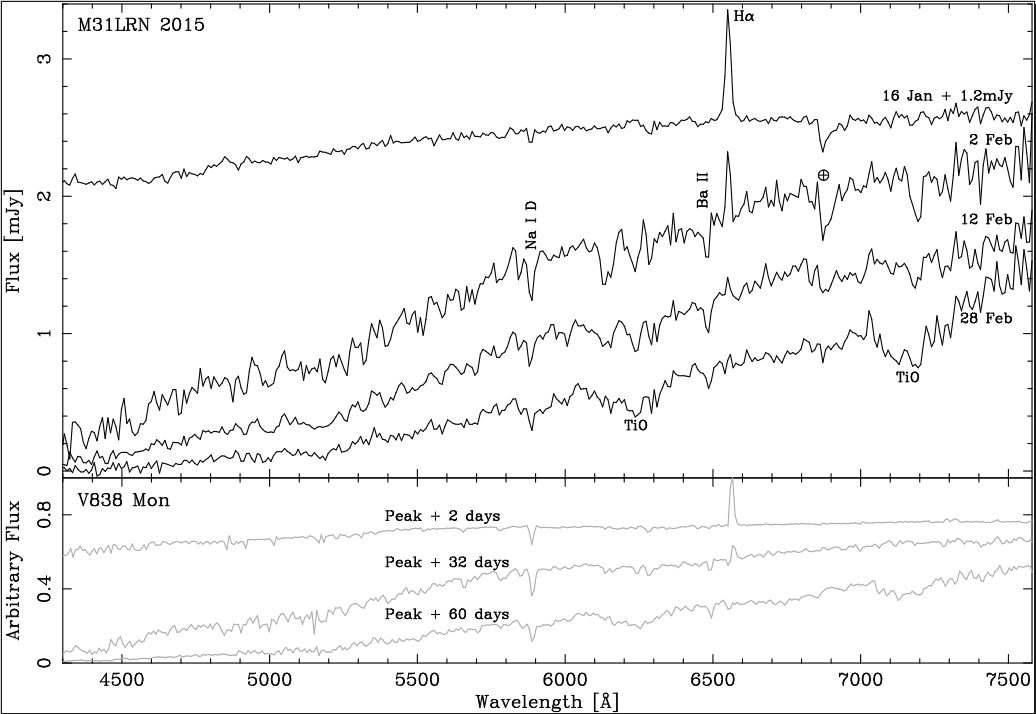 Top: SPRAT spectra of M31LRN 2015 taken on Jan 16, Feb 2, Feb 12 and Feb 28, 2015. The LRN was at its brightest between the first and second spectrum. Emission and absorption lines from a number of atoms and ions have been labelled. Bottom: Three spectra of a similar type of object, V838 Mon, displayed for comparison purposes.