We don't as yet know very much about black holes, but one of the things we do know is that it's not a good idea to get too close to one of them! Their powerful gravitational pull can rip apart anything that passes nearby. Yet a star may have survived such a close encounter, an encounter that was recently observed by LJMU's David Bersier and colleagues using the Liverpool Telescope. 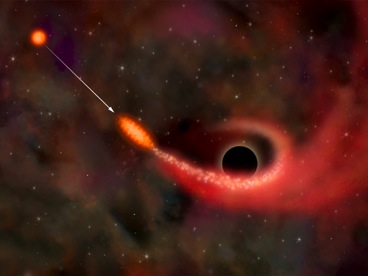 An artist's impression of the passage of a star close to a black hole, causing a a Tidal Disruption Event (image courtesy CXO/NASA). 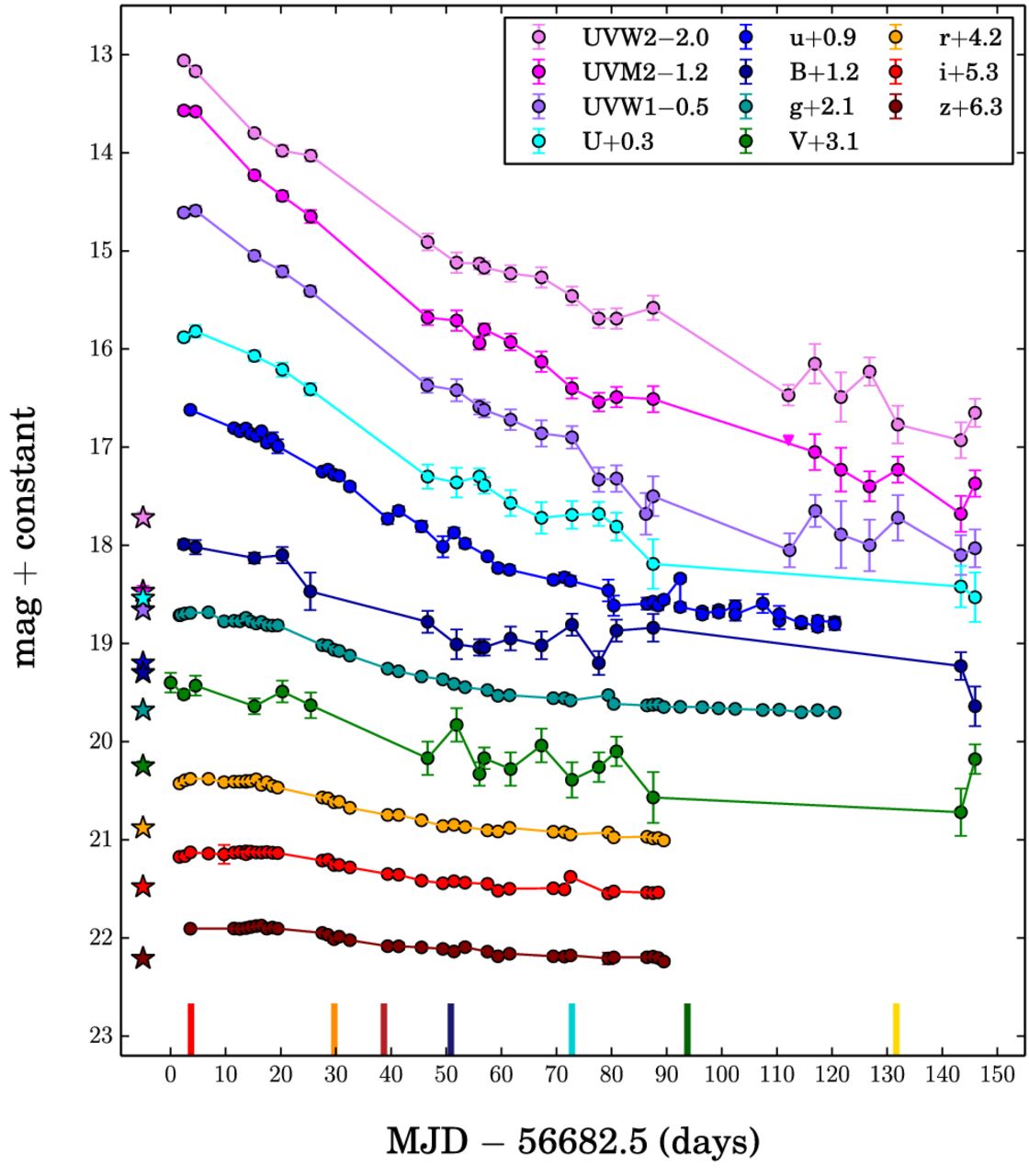 Light curves showing how the brightness (magnitude) of the stellar debris steadily changes with time during the star's encounter with the black hole. The event was observed over a considerable period of time in a variety of imaging filters. The u, g, r, i and z-band data were secured at the LT; the other data were observed by Swift. (MJD is the Modified Julian Date.)

Only a few such stellar disruptions have been seen before. Close encounters are thought to be rare, and to date their discovery has largely been by accident. In order to catch such an uncommon event, astronomers need to look at a large fraction of the sky, and look often. This is what the All-Sky Automated Survey for Supernovae (ASAS-SN, pronounced "assassin") is designed to do. Its six small telescopes - four in Hawaii and two in Chile - scan the sky every night, looking for variable sources, transient objects, and sudden outbursts. ASAS-SN discoveries often trigger rapid follow-up observations on larger telescopes, particularly robotic facilities like the LT.

On January 25, 2014, an otherwise anonymous galaxy located a mere 650 million light years away in the constellation that contains the "Big Dipper", looked significantly brighter than usual. This object, nicknamed ASASSN-14ae, was initially thought to be a supernova, the explosion of a massive star, albeit an unusual one.

As the story unfolded it became clear that ASASSN-14ae was not a supernova, but was instead something entirely different: a Tidal Disruption Event, or TDE. Such an event is believed to occur when a star gets a little too close to a black hole, an object with a mass several million times that of our Sun. Luckily, the star in this case seems to have survived the encounter, with only a small chunk of matter being ripped off!

The amount of energy released during the event allowed researchers to calculate that only one thousandth of the mass of our sun - about the mass of the planet Jupiter - had been sucked into the black hole.

Light curves, showing how the brightness of the debris ripped from the star varied during the encounter, are shown to the right. As the debris falls towards the black hole it settles into an "accretion disk", where it gets hot and thus shines. The steady decline in brightness of this material, seen over a period of many weeks with Swift and the LT, matches what is expected of a TDE.

The Liverpool Telescope is the perfect machine to follow an event such as this. Although Holoien and his team needed access to a telescope for only ten minutes or so each night, observations were needed over a long period of time. The fact that the LT is entirely computer-controlled means that the observations could be scheduled remotely and all in one go: a very lengthy stay at an overseas observatory was thus not required. This is perhaps a less romantic way of observing, but is none-the-less a lot more efficient.

Monitoring the whole night sky every other night, the ASAS-SN survey has a good chance of detecting more of these events, and perhaps even more exotic cosmic catastrophes that we haven't thought of yet! In the meantime, the LT will be ready and waiting to react to ASAS-SN triggers and secure the observations needed to better understand these remarkable cosmic phenomenon.

The observations described here have recently been published in volume 445 of the Monthly Notices of the Royal Astronomical Society by Holoien, Bersier and their collaborators. A copy of the article is available here.