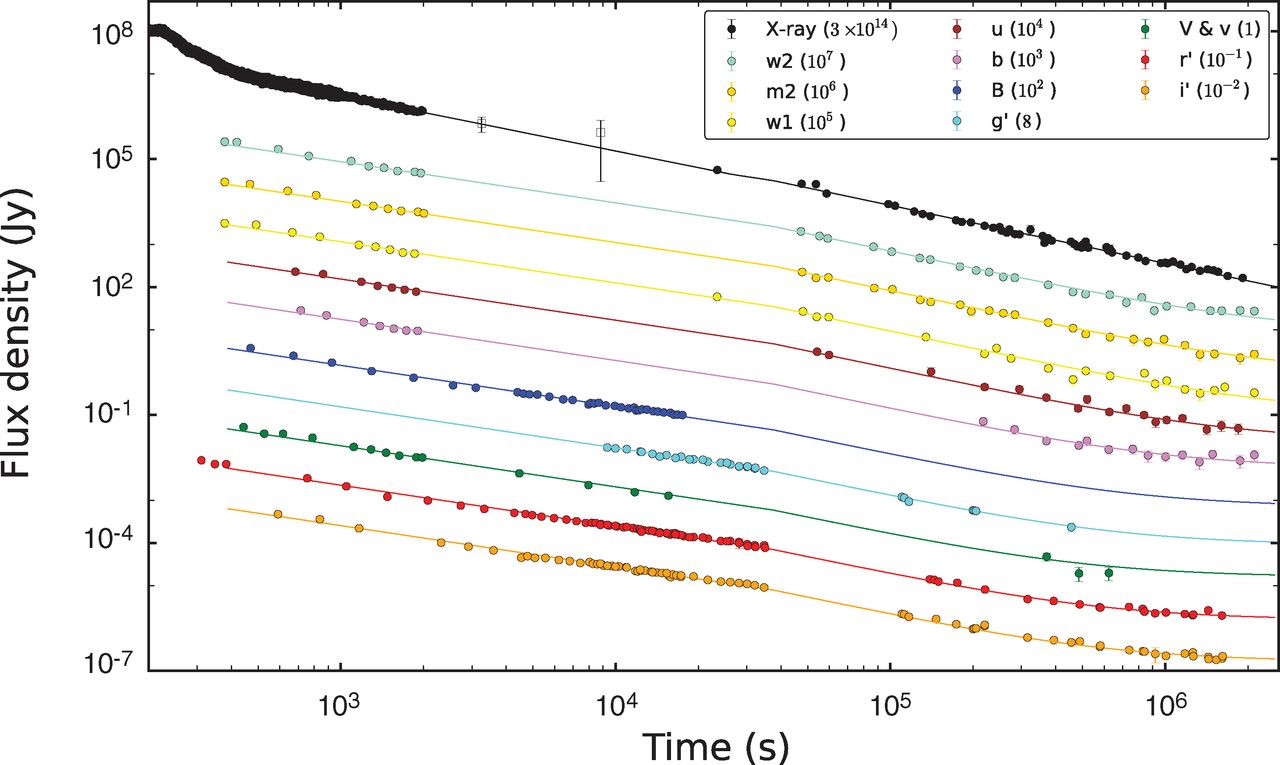 Above: X-ray, Ultraviolet (w2, m2, w1 filters) and visible (B,V,u,b,v,g',r',i') light curves showing the declining brightness of GRB 130427A over a period of a few weeks. In this plot LT and Faulkes-North r' and i'-band data points are coloured red and yellow. The discovery was triggered in the X-ray (black data points). [Full size image]

On April 27, 2013 many of the world's astronomers observed the brightest Gamma-Ray Burst (GRB) ever detected by the Swift satellite. Named GRB 130427A, it was one of the most energetic nearby events ever encountered. At a redshift of z = 0.3399, which corresponds to a distance of only 3.6 billion light years, GRB 130427A was a truly unique and extraordinary "nearby monster".

GRBs trace the most energetic explosions in the Universe. Some are believed to occur after the merger of two compact objects - a pair of neutron stars or a neutron star and a black hole. Others may be caused by the collapse of a rapidly-rotating massive star. The former are classified as short-GRBs, due to the very limited durations of their gamma-ray emission (less than a few seconds). The latter are classified as long-GRBs, since the mean duration of their "prompt emission" phase lasts longer than a few tens of seconds.

GRB 130427A belongs to the second class of object (its duration lasted longer than 160 sec) and was probably the result of the collapse of a star 30-40 times the mass of the Sun with an intrinsic luminosity of 3 x 1053 erg/sec (for comparison the luminosity of the Sun is a mere 3.8 x 1033 erg/sec, one hundred billion billion times less!).

Ground-based facilities such as the Liverpool Telescope and Faulkes-North (a sister telescope to the LT) were used to monitor the optical behaviour of GRB 130427A, from very soon after the explosion up to relatively late times (see the attached light curves). These monitoring observations tracked the evolution of the burst emission with a high cadence, from the initial "prompt" phase to the "afterglow" phase (Maselli et al. 2014).

Careful analysis of these multi-wavelength data (which include GeV, Gamma-ray, X-ray, ultra-violet and optical bands) showed that the relatively nearby GRB 130427A had similar properties to the most luminous and much more distant high-redshift GRBs. This result suggests that a common central engine may be responsible for producing GRBs in both the contemporary, nearby universe and in the much more distant, early universe, as well as over the full range of GRB isotropic energies. Moreover, "monsters" like GRB 130427A seem to be strictly connected with Supernovae explosions (GRB 130427A was subsequently found to be associated with SN 2013cq) which, prior to these observations, was observed to be the case for only the weaker long-GRBs (Melandri et al. 2014).

Clearly, with their rapid response capabilities, robotic telescopes like the Liverpool Telescope are crucial to our understanding of the rapid evolution of these remarkable transient objects, both at early times during the prompt/afterglow phase and at later times as the GRB afterglow fades and the SN phase emerges.