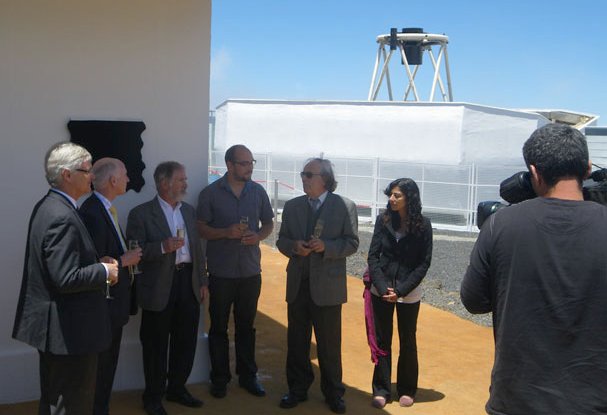 A new addition to the LT observatory site has recently been completed and officially opened by the Vice Chancellor of Liverpool John Moores University (LJMU), Professor Nigel Weatherill, in an inauguration ceremony held on 3rd May 2012. The Support Building is a multi-purpose structure comprising a workshop, storage and office/research facilities.

The Support Building's workshop provides assembly and commissioning areas for new instruments prior to installation on the telescope, and also acts as maintenance facility for existing instrumentation and telescope hardware systems. The control room and office is for the benefit of personnel visiting the site on the occasions it's necessary to actually have someone in-situ to commission and test new instruments, and when performing service revisions in existing instrumentation and telescope hardware. The building also has ample storage facility to house important spares and installation/lifting equipment for the operational running of the telescope. This will facilitate quick turnaround times on the occasions when part replacement is necessary, and therefore keeping off-sky time to a minimum.

The new building is some 20m long by 5m wide, situated 10 metres south of the observatory building and connected by fibre optic links to the multiple computer racks in the telescope building, to allow full control of the telescope from the support building office when on-site commissioning of new instrumentation is required.

In all over thirty people were at the ceremony, the list of attendees including but not restricted to LT group personnel, representatives from the other telescopes on the Observatorio del Roque de los Muchachos (ORM), the ORM manager Dr. Juan Carlos Perez, the mayor of Garafia Sr Yeray Rodriguez Rodriguez, the support building's architect Sr. Gabriel Henriquez, and Sr. Jose Eloy Martin Canadillas from the building company.

Professor Bode said “The opening of the Support Building marks an important step in the continued development of the Liverpool Telescope to keep it at the forefront of astronomical discovery internationally.”

Later that evening, many of the visitors reconvened at the telescope to watch it routinely "come alive" at sunset with no need for outside prompting, and to begin observing autonomously - without human intervention. Afterwards the visitors took temporary manual control and made some observations for themselves. ARI PhD student Doug Arnold said "The evening observing session with the Vice Chancellor and other LJMU staff went very well. We started with solar system objects such as the Moon and Saturn, and moved on to globular clusters and galaxies. It was excellent to see a wide range of people at the opening. It was evident that the LT's operations are well regarded by the civil and scientific community."

Professor Steele commented “The development of the new building was a great example of collaboration between the ARI, Property Services and the local companies and authorities on La Palma who all worked together to deliver this new facility. It greatly improves the working conditions for colleagues who make regular trips out to maintain and upgrade the telescope, bringing efficiency gains and greater productivity all round.”