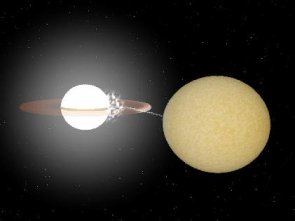 An artist's impression of the helium eating binary KL Dra. The stream of helium can be seen flowing from the lighter star on the right to its more massive companion on the left. Credit: R. Hynes and G. Roelofs. [bigger version (10.4kB)]

The Liverpool Telescope (LT) has been used in conjunction with the orbiting Swift satellite by astronomers at Armagh Observatory to spot violent eruptions on an extremely rare helium binary star system.

The team of astronomers, led by Dr Gavin Ramsay of Armagh Observatory, observed violent eruptions from an interacting pair of stars that orbit around each other every 25 minutes. Unusually, these outbursts take place at regular and predictable intervals, erupting every two months. The new observations were made using the LT and the orbiting Swift observatory. The results will appear in the journal Monthly Notices of the Royal Astronomical Society.

The stars are both helium-rich white dwarfs, the compact remnants that are the end state of stars like our Sun. Reflecting their location in the direction of the constellation of Draco, they are named KL Dra. They are separated by a distance equivalent to just half that between the Earth and Moon, close enough for the more massive partner to drag helium off its lighter companion.

The resulting stream of helium travels from one white dwarf and eventually lands on the other at speeds of millions of km per hour. Most of the time the material gets jammed up in a swirling disc around the accreting companion, with only a trickle landing on the star itself, causing it to quietly glow at optical, ultra-violet and X-ray energies. However, the team discovered that every two months the material in the disc gets suddenly released in a giant eruption that causes the stellar system to shine tens of times more brightly than before.

This binary is one of very few systems on a strict helium diet. The hydrogen which was originally in both stars has long been converted into helium and heavier elements. Almost all other interacting binary systems so far discovered transfer hydrogen material instead. Since helium is heavier and has different properties to hydrogen, the team expect the eruption properties of KL Dra to be different to those of the more familiar hydrogen eating binaries.

As KL Dra is a helium eating binary that erupts regularly and predictably, scientists can plan detailed and sensitive observations using a range of telescopes when it is in outburst. These observations will potentially have wide ranging implications since the same general process of accretion takes place in many astrophysical systems, ranging from young stars in the process of forming, to massive black holes found at the centre of galaxies. 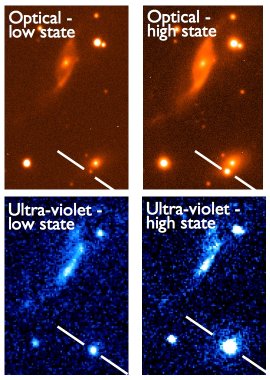 Images of KL Dra when it was in a low brightness state (left) and a high brightness state (right). The upper images were taken using the LT to study the system in visible light while the lower images were made using the Swift satellite to observe the system in ultraviolet light. The position of KL Dra is located between the white lines. The galaxy in the mid-upper area of the image is a distant galaxy as is the fuzzy object close to KL Dra. Credit: Upper images © 2009-2010 LT Group & Gavin Ramsay; lower images Swift Satellite-UVOT/Gavin Ramsay. [bigger version (115kB)]

The team of astronomers obtained complementary observations of KL Dra using the Swift observatory. This showed that the eruption was seen very strongly in ultraviolet (UV) light. Surprisingly, unlike the hydrogen eating binaries there was no change in the system's brightness in X-rays during the eruption.

Tom Barclay, a postgraduate student at Armagh Observatory and UCL's Mullard Space Science Laboratory said, "We have a programme to take observations of a dozen helium eating binaries using the Liverpool Telescope to see if they behave in the same way. It was a big surprise to see a second outburst from KL Dra just two months after the first. We then predicted the next outburst would start on December 7th of last year. It was very exciting when our observations showed that it went into outburst on exactly that date!"

Prof. Iain Steele, Director of the Liverpool Telescope commented, "This is another excellent example of the unique power of our robotic telescope that proves particularly effective when it works with space based observatories like Swift. In this case it helped us to discover a completely new type of celestial object. The flexible schedule of the Liverpool Telescope makes it easy for us to coordinate our observations with other facilities and monitor objects that vary on timescales from seconds to years. This approach is virtually impossible with a conventional professional observatory."

Dr Simon Rosen of the University of Leicester and part of the team who made the discovery added, "Thankfully, X-rays and most UV radiation doesn't get through the Earth's atmosphere, so only space-based observatories can observe the high-energy emission from these extreme objects. With its unrivalled capability for making very frequent X-ray and UV observations, we were able to use the Swift to probe the system at high energies and confirm the Liverpool Telescope result."

Dr Ramsay is delighted by the team's work. "Projects like this can take several years to deliver results, so it was great to get such an interesting finding after just a few months."