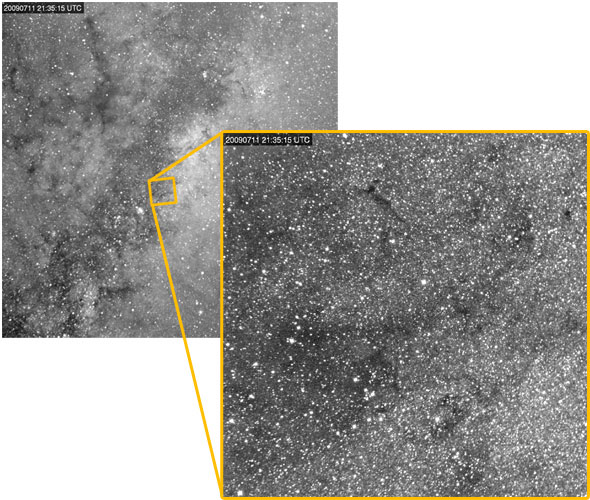 Contemporaneous observations of the Milky Way by the 20°-FOV SkycamT (upper left) and the zoomed-in view by the new 1°-FOV SkycamZ (lower right). © 2009 LT Project.

A new camera, "SkycamZ" (pronounced "skycam-zed"), has been installed on the LT, enabling simultaneous observations of targets with other instruments on the telescope. In particular it allows contemporaneous photometric observations to be obtained with the FRODOSpec spectrograph and RINGO photometer at similar magnitude limits to those instruments.

Mounted piggyback on the LT's secondary mirror top-end ring, SkycamZ consists of a 1024x1024 pixel Andor ikon-M camera mounted on an Orion Optics AG8 8-inch newtonian relector. The unfiltered setup has been designed to give a field of view of ~1°, with a pixel scale of ~3 arcsec per pixel. Images are taken once per minute, and current testing indicates a limiting magnitude of 18.0 for a 10-second exposure.

Images are not immediately available as those from SkycamA & SkycamT are, but anyone with an interest in using SkycamZ data for science can contact us at the usual address. 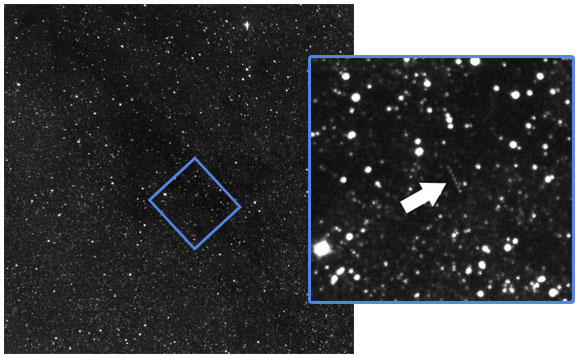 The one-degree field of view of SkycamZ at left. Box shows location of inset closeup at right, where a compilation of seven images shows the track of the 16th-magnitude spacecraft LCROSS (arrowed). © 2009 LT Project.

As part of the commissioning tests, the opportunity was taken to image the LCROSS spacecraft, currently in orbit around the Earth-Moon system, en-route to deliberately impact the Moon's south pole on October 9th to look for the presence of water. See the main LCROSS website for further details of the mission.

The two currently-connected components of LCROSS are the ~2m "shepherding spacecraft", and the 12.7m Centaur rocket upper stage. Together the stack is 14.5m long and 3m in diameter. The Centaur is painted white, and with 50% illumination has a theoretical magnitude of approximately 16.0 at the distance of the Moon.

The LT's main optical imager RATCam also observed LCROSS at the same time, demonstrating the simultaneous nature of observations that can now be made with the new setup. RATCam has a much narrower field of view (4.5 arcmin), and made twenty 5s exposures of the spacecraft over the same five-minute period. A compilation sequence is shown below; note the variation in atmospheric seeing during the exposures.