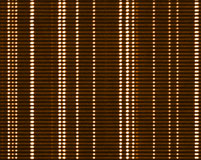 On the night of Friday 3rd April 2009, the long-awaited first light of the FRODOSpec optical spectrograph was achieved. This new instrument, funded by the University of Southampton and Liverpool JMU, represents a leap forward in the capability of the LT.

First light on sky was achieved with the red arm on 3rd April, with the determination of the focal plane position of the input optics allowing the telescope focus and pointing offsets necessary for operation to be derived. 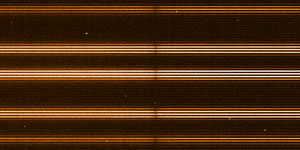 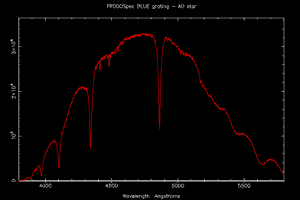 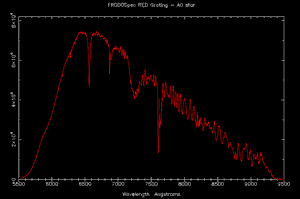 This allowed some initial test spectra of a number of stellar sources to be obtained with the red VPH grating (the very first object observed was the bright AO star 30 Mon). First light with the blue optics was obtained the following night.

Preliminary measurements indicate that the resolution and throughput are as expected; see the FRODOspec web page for full details. The instrument is available for application though all TAGs, with routine observing to commence at the start of Semester 09B.

About FRODOspec
FRODOspec (Fibre-fed RObotic Dual-beam Optical Spectrograph) provides complete spectral coverage from 3900 to 9500 Angstroms in a single exposure with a resolution better than 2000, as well as a higher resolution option which gives resolutions greater than 5000.

The instrument is bench-mounted on the floor of the telescope enclosure, not on the LT itself. A fibre bundle mounted in the LT Cassegrain focus feeds the light to the instrument where it is split into short wavelength (3900-5700Å) & long-wavelength (5800-9400Å) beams before entering the individually optimized collimators - the "blue" and "red" arms respectively.

Two resolution options are available on each arm. With low resolution selected, the entire spectrum from the blue cutoff of the optical fibres (~3800Å in the blue arm) through to the red limit of the detectors (~1µm in the red arm) can be obtained in a single shot.

The low resolution is implemented using conventional transmission gratings, while the higher resolution option employs a volume phase holographic (VPH) grating bonded to a prism (the prism is to ensure the beam is thrown to the same angle as that obtained using the diffraction grating at low resolution). The central wavelengths in this configuration are fixed, centered around features of astrophysical interest.