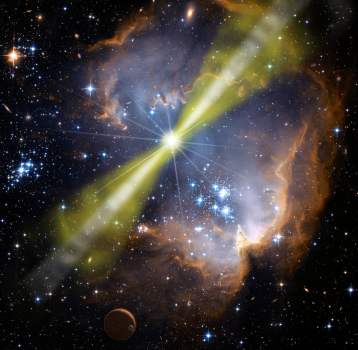 (based on the official press release)

The brightest explosion ever seen was observed in March this year. Now a team of astronomers from around the world have combined their data from satellites and ground-based observatories to explain what happened in an article released in the latest issue of Nature[1]. They show that the jet from a powerful stellar explosion was aimed almost directly at Earth. The event, called a Gamma-Ray Burst (GRB), was bright enough for human eyes to see despite originating in a galaxy halfway across the Universe.

GRBs are the Universe's most luminous explosions. Early in the morning of 19 March, the Swift satellite, a joint NASA/UK/Italian mission, pinpointed an extremely bright GRB and immediately sent out an alert to observatories around the world. Two robotic wide-field optical cameras in Chile also observed the brief flash: "Pi of the Sky," which is operated by the Center for Theoretical Physics in Warsaw, Poland, and TORTORA, based at ESO's La Silla Observatory. TORTORA is run by a Russian-Italian collaboration. Within minutes many more telescopes were observing, allowing for the most detailed study of a bright GRB ever undertaken using data through all of gamma-ray, X-ray, visible and radio wavelengths. By rapidly coordinating their efforts using data sent over the internet, astronomers were able to ensure they made the best possible use of all available British and international telescopes to observe this extraordinarily bright event. Among the telescopes which responded to the alert from Swift was the LT. 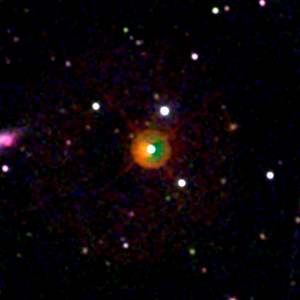 Swift imaged GRB 080319B with its UltraViolet and Optical Telescope (UVOT) and X-ray Telescope (XRT). The event set a record for the brightest-ever gamma-ray burst. This colour composite is is from UVOT data. (credit: NASA/Swift/Stefan Immler)

A team of astronomers, led by Judith Racusin of Penn State University, USA, present their findings in a paper to appear in the September 8 issue of the journal Nature. The team conclude that the extraordinary brightness of the March 19 burst arose from a narrow jet that shot material directly toward Earth at 99.99995 percent the speed of light. The data clearly reveal the complexity of a GRB in which a narrow, ultra-fast jet is present within a wider, slightly slower jet.

Dr. Andrea Melandri, one of the JMU astronomers closely involved in GRB research, said "The study of GRBs is still a very young field compared to many branches of astronomy, and in just the past few years we have seen enormous advances in our understanding of their physics. Among all the bursts we have studied, this one is so important because just by chance the narrow jet was pointing straight at us. That provided us a unique and revealing view on the properties of these explosions."

Prof. Iain Steele, Director of the Liverpool Telescope explained, "Because our telescope is robotic, it can generally respond much quicker to an alert from a satellite than a conventional instrument. This has allowed the telescope to follow up over 30 gamma ray bursts since it was built in 2004, of which this latest example is the brightest and most exciting yet. We probably won't see another one like this for 10 years."