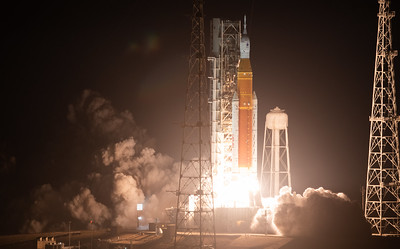 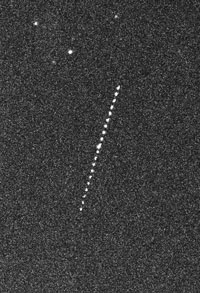 Sequence of twenty images by the Liverpool Telescope's IO:O imager showing the motion of the Orion capsule against the background stars on the morning of 17th November 2022. Left: images arranged as an animation. Right: the same images stacked. Credit: Liverpool Telescope group.

The United States' National Aeronautics and Space Administration (NASA) began its Artemis program with the launch of the "Artemis 1" mission on Wednesday. Artemis 1 is the first crew-capable deep-space mission since Apollo 17 in 1972, and marks the beginning of humans returning to the Moon after a gap of 50 years.

In the first of a series of increasingly complex Artemis missions, Artemis 1 should see the uncrewed (for this mission) Orion spacecraft spend over three weeks in space, including over five days orbiting the Moon, before returning to splash down in the Pacific Ocean on 11th December. The whole mission should last about 25 days.

Artemis 1 is the first mission of the Artemis program, which aims to return astronauts to the Moon by 2024. It will use innovative technologies to explore more of the lunar surface than ever before, and in collaboration with commercial and international partners, establish the first sustainable long-term human presence on the Moon. The experience gained will lay the groundwork for the Artemis programme's long-term goal of sending humans to Mars.

Of the many Artemis missions planned over the next ten years, Artemis 2 (scheduled for May 2024) will see Orion make basically the same flight as Artemis 1 but with crew on board. The first lunar landing of the Artemis program will be on Artemis 3 (2025), which should see crew in lunar orbit transferring from Orion over to SpaceX's Starship Human Landing System (HLS) spacecraft to go on to make a landing on the Moon.

Artemis 1 began at 06:47 UT on 16th November with the launch of NASA's Space Launch System (SLS) rocket, more powerful than the Saturn V that sent Apollo to the Moon. Less than two hours later the SLS' upper stage boosted Orion out of low Earth orbit to begin first leg of its journey, a translunar trajectory to the Moon.

Twenty-two hours later, on 17th November, Orion was some 185,000 km from the Earth and above the Liverpool Telescope's horizon. Using the LT's workhorse optical camera IO:O, a sequence of images was obtained between 06:40 and 06:50 UT (see right) that show Orion moving almost directly away from the Earth at 1.4 kilometres per second.

North is at top in the images, and the spacecraft's motion is from top to bottom along the track. Each image is a ten second exposure every ~30 seconds. Orion was still close enough to the LT that the Earth's rotation caused the track to curve slightly to the west — the LT moved eastwards by 250km during the imaging sequence.