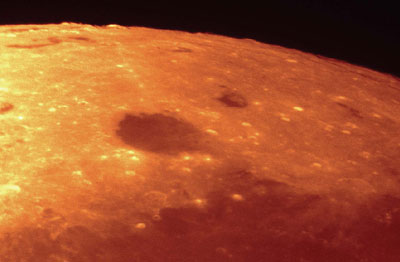 Observations of the Moon in polarised light have been made by the Liverpool Telescope during a recent total lunar eclipse, as reported in a paper just published in Monthly Notices of the Royal Astronomical Society.

Total lunar eclipses occur when the Moon passes completely into the Earth's shadow and all direct light from the Sun is blocked. The bright full Moon dramatically fades, but still remains slightly visible due to indirect light refracting through the Earth's atmosphere (see diagram below).

As this light passes through the atmosphere it undergoes innumerable scattering events off air molecules. This removes all but the red part of the sunlight, which then goes on to dimly illuminate the Moon. This is why the Moon appears red (as well as faint) during a total lunar eclipse.

However, another effect of this scattering is that the red light also becomes slightly polarised, which can be detected through polarimetry. Polarimetry is the measurement of the angle of the vibrations of a light wave – normal light contains a mixture of light with all different angles, and so appears unpolarized. But when light is scattered multiple times, it will become polarized. This is how Polaroid sunglasses help you see better on a hazy day. 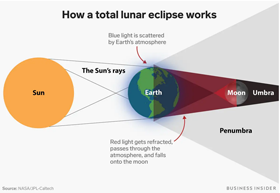 The most recent lunar eclipse was on 16th May 2022 and was observed using a polarimeter at the Liverpool Telescope. The measurement used the LT's new "MOPTOP" polarimeter to show that the reflected light from the Moon was polarized by up to 2 percent. Only three previous successful measurements (in 1968, 2014 and 2015) of this phenomena have ever been made before.

The polarization measured was in the middle of the previous values found. MOPTOP also measured the colour of the Moon during the eclipse, and found it also to be at the middle of the range from previous eclipses. Combining this information together this is strong evidence that the degree of polarization changes from eclipse to eclipse, and must be related to the amount of dust and clouds high in the Earth’s atmosphere on that particular day.

As well as being important in its own right, this information also helps astronomers planning to use polarimetry to observe exoplanets transiting their host stars.

If polarization signals could be found, it would allow us to infer the presence and distribution of clouds in the exoplanet's atmosphere.