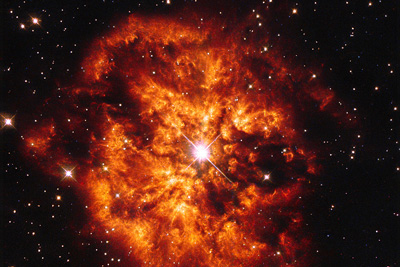 Hubble Space Telescope image of the star WR 124, surrounded by hot clumps of its own outer atmosphere ejected into space by fierce stellar winds over the last ten thousand years. This star is similar to those which created the supernovae SN 2021csp and SN 2019hgp mentioned in the text. Credits: original image ©1998 NASA/ESA, reprocessed version ©2015 Judy Schmidt.

Exactly what happens to the most massive stars at the end of their lives has long been mysterious. From observations of stellar populations within our own Milky Way galaxy and its neighbours, we know that many such stars lose their outer hydrogen layers to become Wolf-Rayet stars — very hot and luminous stars that are rapidly shedding material into space in high-velocity winds. Some models predict that such stars should eventually collapse to form black holes, but observational evidence of this has so far been lacking.

In work recently published in Nature and soon to be published in the Astrophysical Journal [preprint], a team of astronomers used the Liverpool Telescope (LT) alongside other facilities worldwide to identify a new class of supernova — dubbed type "Icn" — that may reveal this transition.

The first such event (known as SN 2019hgp) was discovered in 2019 by the Zwicky Transient Facility (ZTF), a survey telescope in California. LT astronomers were able to obtain follow-up imaging observations (with IO:O) and spectroscopy (with SPRAT) within a day of discovery, giving crucial insight into the early phases of the explosion. The spectrum of the supernova was dominated by narrow lines of highly-excited carbon, oxygen, and neon — a combination never seen before in any cosmic transient. The properties of these lines suggested that material ejected at high velocities by a dying star had slammed into a dense sphere of carbon and oxygen rich material, much as one would expect from the explosion of a Wolf-Rayet star. The study of this event has recently been published in Nature by a team led by Avishay Gal-Yam, a scientist at the Weizmann Institute for Science in Israel.

The second event (known as SN 2021csp) was discovered in February 2021, also by ZTF. The Liverpool Telescope was the first facility on the scene after discovery, again acquiring SPRAT and IO:O observations that showed a fast and luminous supernova with strong, narrow carbon and oxygen lines — much like in SN 2019hgp. This provided the impetus for an LJMU-led team to quickly obtain crucial ultraviolet observations from the Hubble Space Telescope before the source faded away, providing even stronger evidence in favor of a Wolf-Rayet like progenitor. Additionally, continued observations from the Nordic Optical Telescope (one of the Liverpool Telescope's "neighbours" on the island of La Palma) showed the explosion to fade away almost to nothing within just two months — quite unlike normal supernovae, which take years to fade. The team interpreted this as evidence that most of the star's mass had collapsed into a black hole, rather than being ejected into space. This study was led by Daniel Perley, a staff member at LJMU's Astrophysics Research Institute, and has recently been accepted by the Astrophysical Journal [preprint].

Together, these two events suggest a new scenario for the fates of the most massive stars: they may produce a special kind of fast and fleeting supernova dominated by interaction between a small amount of material ejected outward early in the collapse and the pre-existing Wolf-Rayet stellar wind.

Type Icn supernovae are rare events and cannot on their own represent the deaths of all Wolf-Rayet stars. However, luminous events like SN 2019hgp and SN 2021csp may be just the tip of the iceberg: "If a similar explosion occurred, but the material was expelled more slowly or if the Wolf-Rayet wind was weaker, we would never know it even happened," points out Dr Perley.

Future, more sensitive surveys — such as with the upcoming Vera Rubin Observatory coupled to follow-up facilities like the New Robotic Telescope — will have a chance of unveiling such "hidden" transients in the coming years.