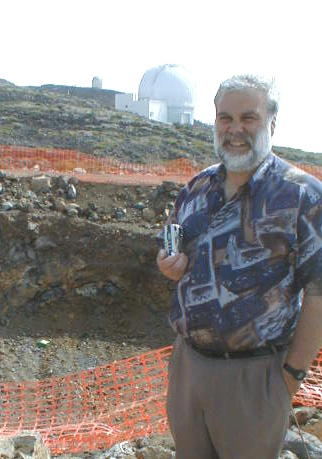 Dave Carter at the LT construction site around 2001.

We are sad to report the death over the weekend of our friend and colleague Professor David Carter. Dave obtained his PhD from the Institute of Astronomy, Cambridge in 1977 working on the surface brightness profiles of galaxies. He subsequently worked at the University of Oxford and the Anglo-Australian, Mount Stromlo and Siding Spring Observatories, before moving on to the Isaac Newton Group on La Palma and at RGO Cambridge where he combined his research with involvement in cutting edge instrumentation.

Dave joined LJMU in 1996 as Project Scientist for the Liverpool Telescope and his determined efforts played a large part in keeping the project on track during a difficult construction phase. He was an outstanding scientist who always took a constructively sceptical approach to the prevailing consensus, and an excellent mentor to younger colleagues and students. He was also a keen cricketer!

Dave took early retirement from LJMU in 2012 but continued to work on the major HST/ACS Coma Cluster survey he established as well as being a regular participant in group seminars and journal clubs. This also gave him the opportunity to step up his work at the Neston Methodist Church and Community Centre and become a local parish councillor. Dave was a great family man, and we send our condolences to his wife and three sons at this difficult time. He will be sadly missed by all.