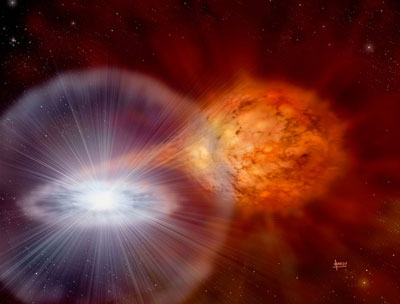 The expanding debris shells from two separate novae that were seen to erupt decades ago, have been discovered and characterised in the recent paper "Two new nova shells associated with V4362 Sagittarii and DO Aquilae", Harvey et al, Monthly Notices of the Royal Astronomical Society (MNRAS), Vol 499, Issue 2, December 2020 (doi: 10.1093/mnras/staa2896).

Because these nova shells are big enough to make out their structure, they are rare objects and of great interest to astronomers. That's because analysis of the debris shells' shapes can reveal insights into the mechanics of the nova eruptions that created them, and also shed light on conditions leading up to the event.

Classical novae occur in close stellar binary systems, with one star a white dwarf and a main sequence star as its companion. The stars are close enough that hydrogen from the companion's outer layers can transfer over to the white dwarf and spiral down to its surface, forming an accretion disk as it does so (see illustration at right).

The infalling hydrogen forms a shallow hydrogen atmosphere at tremendous pressure and temperature. Over time as more hydrogen builds up, pressures and temperatures in the lower layers build up to the point where a runaway thermonuclear reaction starts. The bottom of the white dwarf's atmosphere ignites; heat released from the hydrogen fusing to helium raises the temperature further, increasing the fusion rate and driving the reaction more. This is the third most energetic stellar explosion in nature, and the energy release blows out the remaining atmosphere at speeds of 1000 km/s or more.

This debris of unburnt hydrogen and thermonuclear reaction products flies away from the binary system as an expanding shell. However, rather than being a perfect sphere, the shells that can be made out from Earth take the form of an axisymmetric set of zones. Usually the pattern is one of an equatorial belt and polar cones, but often more complex shapes are formed.

Classical novae are actually non-destructive — both stars survive the event. This leaves them in place for the accretion process to begin again, potentially leading to another nova many years later. It's thought about 50 novae occur every year in the Milky Way galaxy alone, though fewer are actually observed due to intervening dust and gas obscuring the view.

Novae have also been observed in other galaxies, identified as such by their lightcurves and spectra, but none are close enough to make out any shells they might have. Of the few hundred novae in the Milky Way observed over the years, of order only 50 have discernible shells, so only that many sources of extra clues to the inner workings of novae have been observed and characterised. Any addition to this rare subgroup is therefore noteworthy, and the two new shells discussed in the paper by Harvey at al certainly qualify.

The team selected 12 reasonably bright nova systems that erupted more than 15 years before the start of the survey in 2015. Those regions had previously been scanned by the Wide-Field Infrared Survey Explorer (WISE) space telescope as part of its all-sky survey, and showed plausible hints of nebulosity. They then performed deeper narrowband imaging using the 3.2m Aristarchos telescope in H-alpha plus NII (6578A) and OIII (5011A) bands. Shells were found around two systems, V4362 Sagittarii and DO Aquilae.

The Liverpool Telescope's SPRAT spectrograph was used to apply velocity constraints and first-pass nebular analysis of the shells. Hi-resolution spectra were obtained of the V4362 Sgr nova shell using the second version of the Manchester Echelle Spectrograph, installed on the San Pedro Mártir Observatory 2.1m telescope.

Narrowband images of DO Aquilae and V4362 Sagittarii taken in 2016 & 2017 by Harvey et al using the Aristarchos 3.2m telescope. This image adapted from Figures 3 & 4 in the paper. Click image for bigger version.

DO Aquilae (DO Aql) was observed to go nova in 1925. The observations in this study, made in 2015 & 2017, reveal a previously undiscovered nova shell, expanding at a rate of about 0.07 arcseconds/year. The team estimate this system to be 6.7±3.5 kiloparsecs (22±11 thousand light years) distant.

V4362 Sagittarii (V4362 Sgr) was discovered in 1994. Observations made two months later of polarised light emitted by the shell suggested it was axisymmetric, and possibly consisting of a circular equatorial ring and narrow conical polar caps.

Harvey et al processed data from the 1.3m Skinakas Telescope in Crete made in 2006, and found the nova shell back then to be 2.5x3.1 arcseconds in size, in Halpha+NII narrowband imagery. The 2016 data obtained with the Aristarchos telescope gave dimensions as 5.2x5.6" in Hα+NII and 5.2x5.5" in OIII, implying an expansion rate of 0.32 arcseconds/year.

The probable inclination of the system is 70-80°, based on lightcurves taken in 2018 with the RISE2 instrument on the Aristarchos telescope that suggest the system is eclipsing. If eclipses are observed then the system is probably being viewed nearly edge-on to the plane of its orbit. However, eclipses don't always mean edge-on viewing, so more detailed observations of this system are needed to make sure.

Spectral measurements show the shell velocity is relatively slow at just 350 km/s, rather than the average 1000 km/s. Coupling that with the observed increase in angular diameter over a known period of time and taking due notice of the shell's non-sphericity (the expansion parallax method), the distance to the system is found to be just \( 0.5_{-0.2}^{+1.4} \) kiloparsecs (between 1-6 thousand light years), making it one of the closest and brightest nova shells known.

Detail adapted from Figure 12 of the paper, showing a model of the shell's emission in the NII and OIII lines, see text for more details. The full figure shows the shell in other wavelengths and viewing angles. Click image for bigger version.

The shell of V4362 Sgr is poorly resolved in the Aristarchos imagery, so the team tried to visualise its shape and dynamics. They settled on a morphology of an equatorial belt, tropical rings and polar cones. The image at right shows a pseudo-3D photoionisation model of the shell's structure seen from an angle 10° above the orbit plane. There are two views, showing the shell in the light of singly-ionised nitrogen ("NII") at 6584Å, and doubly-ionised oxygen ("OIII") at 5007Å. The model replicates the ratio of NII to OIII emission observed. Note the NII emission structure is larger than the OIII, which is often seen in nova shells. The NII structure's more extended polar caps in this model may be why the real thing is so bright at these wavelengths.

This paper shows that new nova shells can be found from archive data and new limited multi-epoch followup data from small to medium-sized research telescopes — two previously unknown nova shells were discovered and characterised in this way.

There are potentially very many nova shells remaining to be discovered, because (a) so far only 10% of the observed nova system population of the Milky Way galaxy are known to have shells, and (b) it should be possible to detect and determine the structure of more shells if larger aperture and/or space-based telescopes are used.

Because the processes at play during nova events leave their fingerprints in the shell's structure, and nova systems previously thought to be shell-less might actually harbour shells after all, the authors would like there to be more deep followup observations of historical novae. Untangling the geometry of new shell structures would lead not only to a better understanding of the geometry, ionisation conditions and abundances of chemicals in the nova systems, but also reveal information on the chemical enrichment of the interstellar medium through elements created during the thermonuclear process in the nova events themselves.