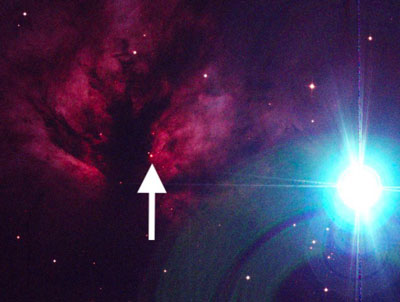 One of the many objects featured in the analysis that discovered the new interstellar absorption band: NGC 2024-1 (arrowed) is a young stellar object in the Flame Nebula. It lies on the boundary between the bright ionised hydrogen region and the dark dust lane that completely blocks its optical emission towards the East. Image from Figure 7 in the paper.

A broad absorption band in the interstellar medium has been discovered recently in the optical range. This is the first time a band of this type has been found in the visible part of the spectrum.

The broad interstellar band (BIB) is centered close to 7700Å with a full width at half maximum of 177Å. It is significantly wider than the numerous diffuse interstellar bands (DIBs) in the optical range that have widths of a few tens of angstroms at most.

The BIB remained undiscovered until now because it lay in the same wavelength region as a strong "telluric" (Earth-generated) absorption feature caused by oxygen molecules in the Earth's atmosphere.

It was discovered during the creation of a library of spectra obtained by the Hubble Space Telescope (HST). Being outside the atmosphere, the HST spectra were unaffected by telluric effects and the new band was therefore more readily detected.

Further detections soon followed. The authors looked at data previously taken by ground-based telescopes because, as Maíz Apellániz himself noted, "once we knew where to look it was not difficult to find the absorption band in ground-based data". They also took new data with the HST and the Liverpool Telescope's FRODOspec spectrograph.

They found that the absorbing material (the "carrier") causing the BIB is generally ubiquitous in the low/intermediate density regions of the interstellar medium. However, it appears to be strongly depleted in the clouds containing a lot of molecular carbon, in young star-forming regions such as those where O and B-type stars are usually located.

Most of the molecular carbon in these star-forming regions has been destroyed by the intense ultraviolet (UV) from the host stars. The clouds however are shielded from the UV and contain a lot of molecular carbon. The BIB band is not present in sightlines passing through these clouds, but is present in lines passing through the UV-cleared regions.

Future work in this field will involve looking at a large sample of interstellar absorption lines to produce a better understanding of how different regions of the interstellar medium filter and absorb the starlight passing through it.