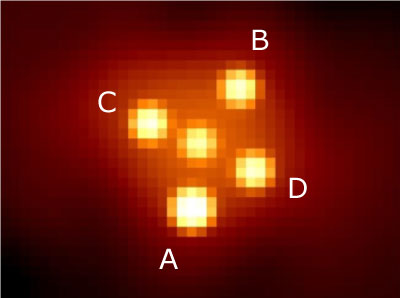 Some of the text in this article was adapted from an item in the "Gravitational Lenses" blog at the University of Cantabria website, and correspondence with the resulting paper's lead author Luis Goicoechea.

Astronomers have detected for the first time a double caustic-crossing in a microlensed quasar.

The collaborative project, between research teams in Russia, Spain, Ukraine and Uzbekistan, used the Liverpool Telescope and the 1.5m telescope at the Maidanak Observatory ("MT") in Uzbekistan to conduct a 14-year monitoring campaign (2006-2019) of the gravitationally-lensed quasar known as the "Einstein Cross" (see right).

A quasar is an extremely luminous active galactic nucleus. At the centre of a galaxy sits a supermassive black hole weighing in at millions to billions of times the mass of the Sun, surrounded by an accretion disc of gas. As the gas falls in towards the black hole it emits huge quantities of electromagnetic radiation. Quasars have luminosities thousands of times that of a galaxy like our Milky Way.

Due to the fact that the Solar System, the foreground galaxy and the quasar are practically aligned, some light rays from the quasar that diverge slightly from that line and would otherwise miss the Earth are instead bent by the galaxy's gravity as they pass through its central bulge and reach the Earth after all. 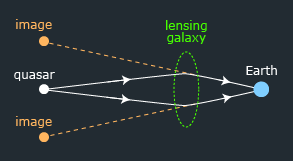 Basic gravitational lensing. Light from a distant quasar is bent by the gravity of a foreground galaxy in the manner of a lens so that the light reaches Earth. From the Earth's viewpoint the incoming rays make it appear that there are multiple quasars surrounding the true position.
©2020 LT Group

The galaxy's gravity therefore acts like a "lens" bringing to Earth light that would have otherwise missed it. The tiny angular separation between the galaxy nucleus and the quasar, the galaxy's elliptical mass distribution, and the fact we're only looking at the tiny UV sources within the inner regions of the quasar's accretion disc, all combine to allow only four "bundles" of rays to make it to Earth. From here therefore we don't see extended arcs and rings but four distinct images of the same quasar surrounding the foreground galaxy (see diagram at left).

That's not the end of the story: these four bundles of rays travel through four different parts of the central bulge of the foreground galaxy, so they are therefore seen through densely populated stellar regions, and there is a high probability of detecting stellar gravitational effects, i.e. so-called microlensing effects. This is where the beams can be further affected by the gravitational fields of stellar populations in the galaxy itself as they move in and out of the beams. The gravity of individual stars in those regions can additionally bend and focus the quasar light even more, affecting the brightness of the image.

The microlenses (stars) affect the image of each source within the quasar's accretion disc to a different extent. More compact (hotter and bluer) sources suffer stronger effects. Additionally, due to the motions of the quasar, lens galaxy (and its stars) and observer, microlensing is a time-variable phenomenon. Therefore, a monitoring of the multi-wavelength microlensing-induced variability of the Einstein Cross can be used to probe the structure of its accretion disc.

Realistic microlensing magnification map for image C of the Einstein Cross. The trajectory of the quasar's accretion disc (yellow arrow) is only illustrative. An animated version is included in the new blog of the Glendama project at https://gravlens.unican.es/limaco/
©2020 Glendama team.

The areas of space where the foreground stars can affect the quasar's light in this way are called caustic regions. Within such a region the flux from the quasar is magnified so it appears brighter, while outside the caustic it is detectably fainter. The boundary between the two is called a caustic fold, and until now astronomers have only ever seen single-fold crossings, where the quasar images either enter or leave a caustic region. A complete traversal of a caustic region (example at right), with entry and exit marked by two fold crossings, had never been seen.

Fortunately, using a long-term multi-band photometric monitoring of the lens system with the LT and MT, the international research team reported the detection of the first double caustic-fold crossing (both the entry and exit of a caustic region) in image C of the Einstein Cross (see below). This confirms that UV continuum sources cross complex magnification maps as predicted by numerical simulations, and suggest that such sources belong to a standard gas disc model. 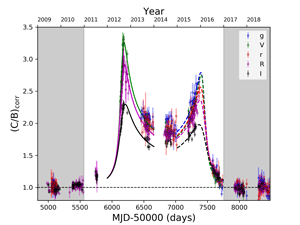 The project used over 4,000 frames taken by the LT and MT to monitor the double peaks (and higher plateau between them) of image C's brightness, characteristic of a caustic region crossing. The bright peaks are when the quasar image crosses the caustic fold surrounding the caustic region, while within the region the image is considerably brighter.

The monitoring campaign practically covered the full life of the LT so far (from 2006 to 2019). The associated paper has been recently published in the journal "Astronomy & Astrophysics" (A&A), and selected as an A&A Highlight in 2020.