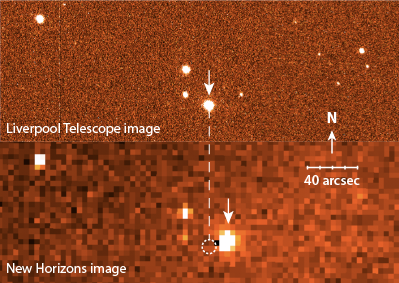 Images of Wolf 359 (arrowed) taken by the LT and New Horizons, 7 billion kilometers apart from each other. Dashed line and circle superimpose position of Wolf 359 from the LT's viewpoint into the New Horizons image. The resulting parallax is just under twenty arcseconds. © 2020 LT Group and JPL/NASA. (click for bigger version)

NASA recently released images of two of the nearest stars to the Sun, taken by its spacecraft "New Horizons" from its viewpoint in the outer reaches of the Solar System. From that position, 47 Astronomical Units (over 7 billion kilometres) from Earth, signals take over 6 hours to reach Earth, and the image data had to trickle across at speeds of less than 2kbps.

Parallax is easily demonstrated by holding an object at arm's length and looking at it, first with one eye, and then with the other. The object appears to shift position relative to the background which should be much further away than arm's length. If you could measure the apparent angular shift of the object, and knowing the distance between your eyes as the baseline between the two views, you could in theory calculate the length of your arm (though in practice it would be easier to just use a tape measure for this particular case).

Surveyors use the same technique (parallax, not a tape measure) to measure distances to remote landmarks, and astronomers have used this technique for nearly 200 years to also "survey" the nearby stars around the Sun. In this case however the baseline is the diameter of the Earth's orbit. By making one observation and then waiting half a year to make the other one, the Earth moves round to the other side of its orbit, creating a baseline of 2 Astronomical Units or 300 million km.

The parallax created in this way is tiny: the largest parallax, for Proxima Centauri, is just 0.8 arcseconds, and stars further out have correspondingly smaller parallaxes. Wolf 359's parallax is half that of Proxima Centauri's at just 0.4 arcseconds. This is about 1/5000 the diameter of the full Moon and absolutely not visible to the naked eye.

Astronomers around the world, professional and amateur alike, were encouraged by NASA to take images of the target stars, as close as possible in time (within a week) of the New Horizons images. Proxima Centauri is too far south to be observed by the LT, but Wolf 359 is an easy target. Our image above was taken on 26th March at 23:35 UT, some 88 hours after New Horizons'.

Why have a time constraint at all? The nearby stars especially actually move across the sky at small but measurable rates. All of the stars in the Milky Way (including the Sun and attendant planets) are orbiting Galactic centre, but all at slightly different velocities. The relative motion of nearby stars with respect to the Solar System, and with the Earth specifically, is called Proper Motion. Proxima Centauri is currently moving across the sky at the rate of 3.86 arcseconds a year, while Wolf 359 is slightly faster at 4.7 arcsec/year. At that rate, Wolf 359 could cover an angle the same size as the width of the full Moon in just under 400 years.

Therefore if the interval between the LT and New Horizons images was too large, the effect of proper motion would become apparent. Keeping the interval within a week kept the effect negligible. It's not negligible however when the interval is half a year, as in the case of measuring annual stellar parallax.

The main picture at the top of the page shows the New Horizons and LT images of Wolf 359 (arrowed) and surrounding stars. Wolf 359's parallax is obvious as the star shifts between images.

The size of the parallax in the above images is measured approximately to be 15.6 arcseconds. The expected parallax is 15.9 arcseconds, based on the size of the Earth-New Horizons baseline, the distance from Earth to Wolf 359, and the angle between those two lines.

As big as the parallax appears in the image, it's still actually a tiny angle in human terms, and not visible to the naked eye. If the average interpupillary distance of the human adult represented the Earth-New Horizons distance, Wolf 359 would be 670 metres (2,200 feet) away. Experience shows it's not possible to observe an object that far away and see it in 3D against the background landscape.

Importance of the Parallax Program

This is the first ever obvious illustration of the shift in star positions as a natural consequence of interstellar flight. Not only that, it demonstrates the feasibility of using stars for autonomous navigation in interstellar space.

The parallax obtained in this way is also "pure" in the sense that, because the two images were taken simultaneously, the parallax is instantly right there in the image with no complicating effect of proper motion to take into account.

Finally, it's a nice demonstration of the sheer distance New Horizons has travelled since its launch in 2006. New Horizons is now over 47 AU from the Sun and exiting the Solar System at 13.9 km per second or 2.9 AU/yr. It's not going in the direction of Wolf 359, but if it were, at that speed it would get there in about 170,000 years.