Late September saw the Liverpool Telescope (LT) taken offline to realuminise the primary mirror and undertake other essential maintenance. Realuminising the primary is a massive undertaking but it went swimmingly, and throughput of the telescope improved by over 40%.

Telescope mirrors differ from normal domestic mirrors in that they use a reflective layer deopsited on the front surface of glass instead of having it encapsulated behind a layer of glass. Front surface mirrors like this are better for precision scientific optics and provide optimum reflection quality, but because the reflection surface is exposed to the atmosphere it degrades faster than, for example, a bathroom mirror. Periodic re-coating is therefore an expected maintainance task for any telescope mirror. See the news story about the 2015 mirror coating for more detailed discussion of how optical mirrors like the LT's are constructed and maintained.

The telescope needs to be dismantled to remove the mirror. Fortunately we do not have to ship the mirror off La Palma to get it recoated. The nearby William Herschel Telescope (WHT) has a vacuum mirror coating chamber and provides the recoating service for many of the telescopes at Observatorio del Roque de los Muchachos. 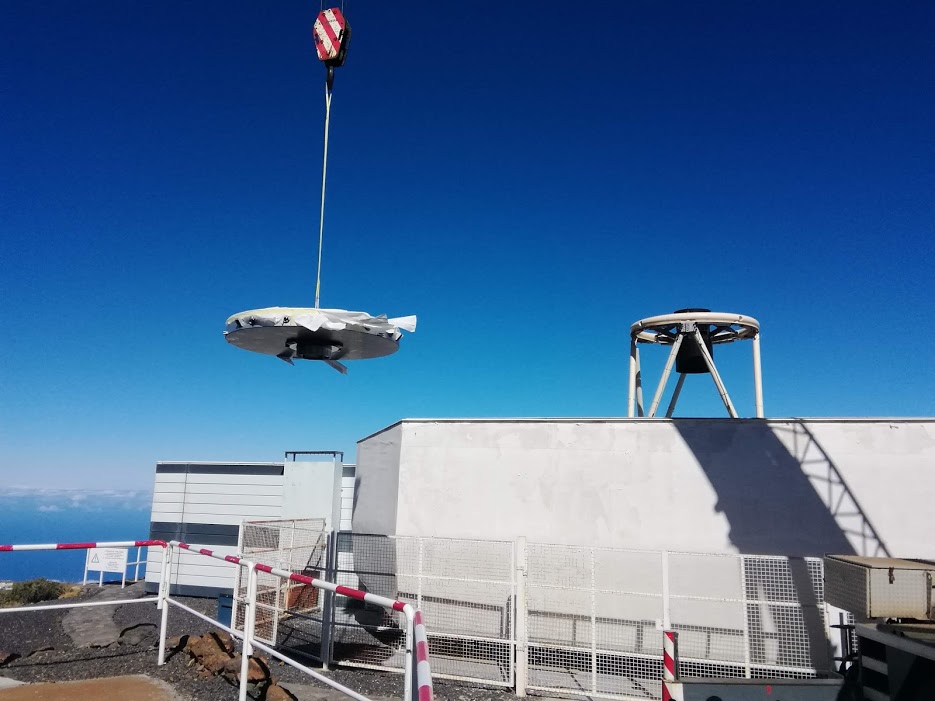 The primary mirror suspended from the crane. (Image © 2019 R. Smith)

The LT primary mirror is 2 metres in diameter and weighs 1.3 tonnes. As you can imagine, manoeuvering such an unwieldy yet fragile and expensive piece of equipment out of the enclosure, into a truck, and 500 metres down the road to the WHT, is quite a tense undertaking. It was skilfully handled however by the on-site team of LT site manager and senior mechanical engineer Stuart Bates, LT project scientist Robert Smith, New Robotic Telescope mechanical engineer Ali Ranjbar, and maintanance support and site engineer Dirk Raback, all in collaboration with a local La Palma crane operator and IAC and WHT staff.

The primary mirror in its mirror cell was slid out from underneath the telescope and immediately covered in lint-free tissue for protection and to prevent dangerously focused solar reflections. The mirror was then attached to the crane hoist and carefully lifted out of its cell, out of the top of the open enclosure, and into its special transit box in the shade of the LT Annexe building. The transit box was sealed and craned onto the truck, which then very slowly drove to the WHT. At the WHT, the mirror's old aluminium layer was carefully removed with powerful acids under strict safety supervision. The glass "blank" was washed and placed in the WHT's huge realuminising chamber. 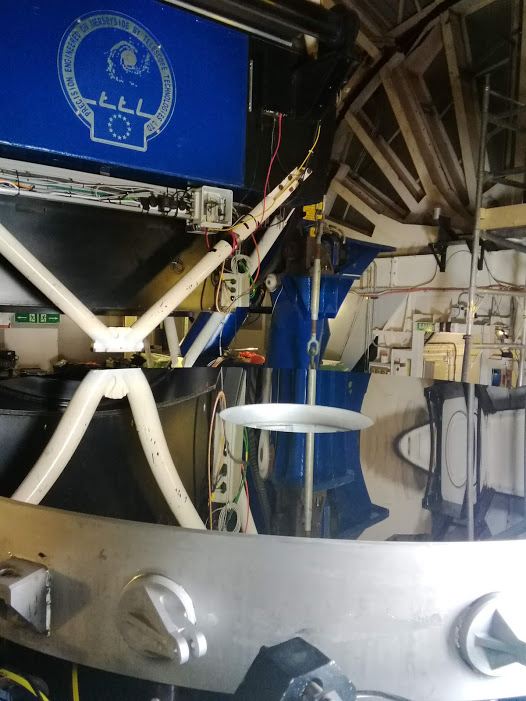 The newly coated mirror dominates the foreground with the partially dismantled telescope structure in the background. (Image © 2019 R. Smith)

Aluminising went fine, and a few days later the primary was put back in the same way it came out. Moderate winds during the mirror hoist caused a slight level of concern, but the hoisting went fine nonetheless and the mirror was placed perfectly onto the pneumatic actuators in its mirror cell.

After that the cell was connected to the telescope, and refitting of the instruments followed in short order. In two days the telescope and all instruments were reassembled, and Robert Smith and Stuart Bates could begin recommissioning the whole system.

The telescope had had its major optical components dismantled and reassembled, and all instruments had been removed and remounted. So from 30 September to 2 October, a full end-to-end test of the telescope's electrical, hydraulic, pneumatic and optical systems was made, along with similar tests for each instrument. This lengthy sequence of tests proved the telescope was operating nominally and that all of its instruments were in focus and working properly.

Some robotic observations were allowed to be made during recommissioning partly for testing purposes, but proper robotic observing essentially recommenced on 2nd October.

Realuminising the primary and recommissioning the telescope afterwards were not the only things done on this maintenance trip. The LT being in pieces afforded a rare opportunity to access normally out-of-reach components for maintenance. Extra tasks completed by the on-site team included:

Summing up, the two weeks of site work was very successful. A very big thank you goes to everyone involved; our own staff, those from IAC and WHT and the specialists contracted locally on La Palma.