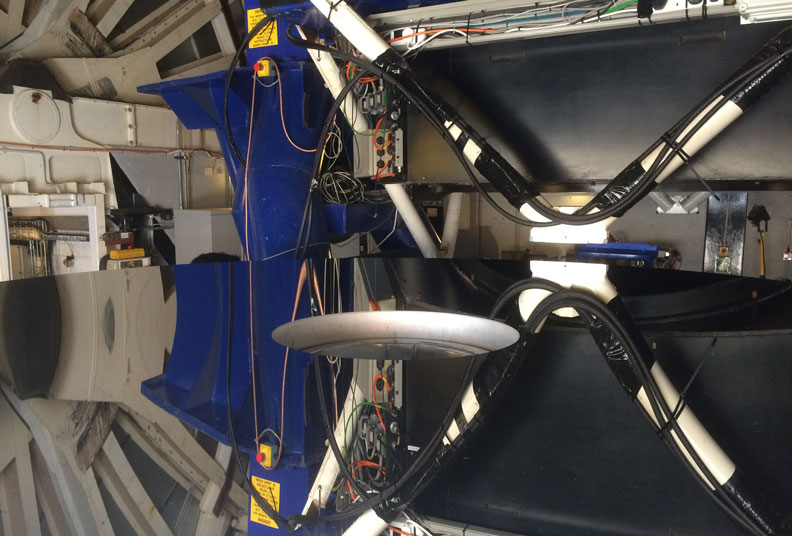 The Liverpool Telescope (LT) will be offline in late September – early October while we realuminise the primary mirror.

The planned timeline for realuminising is:

The mirror will be removed from the LT and taken to the nearby aluminising plant at the William Herschel Telescope (WHT). Removing the mirror involves taking off all of the LT's instruments and dismantling the back of the telescope. Once the mirror is realuminised and the telescope and instruments reassembled, the process of recommissioning begins. The whole procedure is therefore quite involved and takes about two weeks, from instrument removal to resumption of robotic operations on-sky.

The procedure is talked about in a little more detail in a previous article written when the mirror was realuminised in 2015. Some aspects are adapted below for convenience, but for the complete historical article see "LT maintenance: mirrors realuminised and throughput doubled" (5th August 2015).

Realuminisation is necessary because the reflective part of the mirror, an incredibly thin layer of aluminium on the mirror's glass body, degrades over time. Humidity and other contaminants, especially dust from the Sahara desert, chemically attack the aluminium layer and reduces its overall reflectivity. Periodic cleaning is not 100% perfect, and after several years it's eventually better to take that aluminium off and put a fresh layer on.

LT's primary mirror covered in lint-free tissue for transit during the previous realuminisation in 2015, under the watchful eyes of engineering manager Stuart Bates. Photo © 2015 M. Crellin.

The LT's primary mirror is a precision-crafted disc of glass two metres in diameter and 20cm thick, weighing in at 1.3 tonnes. Realuminising such a large and heavy piece of sensitive equipment without scratching it, or causing any damage at all, is a complex procedure:

As touched on above, once the LT's many instruments are refitted, emphasis then focusses on recommissioning the telescope. Over several days and nights the telescope's engineering, optical and computer systems are all checked to make sure it's running autonomously again. Once we're happy, robotic operations recommence and an announcement is made on this website.

Updates will be posted at the head of this article during realuminisation.