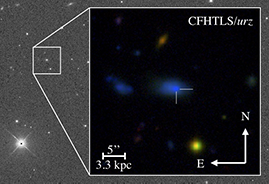 Liverpool Telescope IO:O background image of the field around the host galaxy, with inset showing closeup taken by Canada-France-Hawaii Telescope (CFHT). Position of supernova SN2018gep in its host galaxy is marked by the white crosshairs in the CFHT inset. Click image for bigger version. 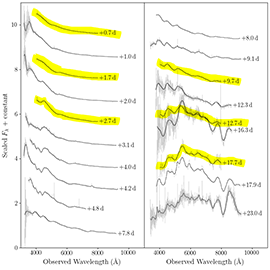 Optical spectra of SN2018gep taken from the ground by the LT (highlighted in yellow) and other telescopes. Numbers next to spectra denote time elapsed in days since supernova. Click image for bigger version.

The SPRAT spectra contributed to the study of the supernova, named “SN2018gep”. The results of the study are presented in a recent paper by Ho et al submitted to the Astrophysical Journal, entitled “The Death Throes of a Stripped Massive Star: An Eruptive Mass-Loss History Encoded in Pre-Explosion Emission, a Rapidly Rising Luminous Transient, and a Broad-Lined Ic Supernova SN2018gep”.

The supernova was identified as a rapidly rising (1.3 mag/hr) and luminous transient, and was discovered extremely early in its evolution — within an hour of the shock breakout.

The robotic Liverpool Telescope (LT) is ideally suited to the follow-up of fast transients such as this one, and the first spectrum of SN2018gep was obtained with SPRAT. The authors believe this is the earliest-ever spectrum of a stripped-envelope SN, in terms of temperature evolution.

This was followed by an intensive spectroscopic monitoring campaign using telescopes from around the world.

A retrospective search through pre-explosion data showed emission in the days to weeks leading up to the event, which is the first definitive detection of precursor emission for a supernova of this class.

The authors of the paper conclude that the data are best explained by shock breakout in a massive shell of dense circumstellar material at large radii that was ejected in eruptive pre-explosion mass-loss episodes.