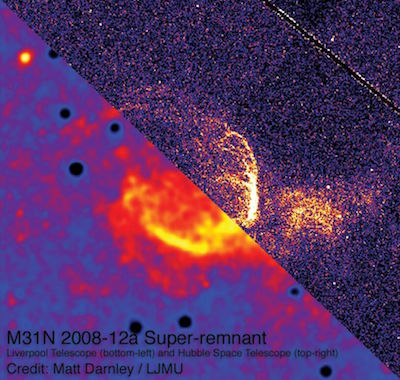 This is a composite image of Liverpool Telescope data (bottom left) and Hubble Space Telescope data (top right) of the nova super-remnant. M31N 2008-12a is in the middle of the image. Credit: Matt Darnley / LJMU.

An international team of astrophysicists have uncovered an enormous bubble currently being "blown" by the regular eruptions from a binary star system within the Andromeda Galaxy.

As reported in this week's Nature, recent observations with the Liverpool Telescope and Hubble Space Telescope, supported by spectroscopy from the Gran Telescopio Canarias, and the Hobby-Eberly Telescope (some of the largest astronomy facilities on Earth) discovered this enormous shell-like nebula surrounding ‘M31N 2008-12a’, a recurrent novae located in our neighbouring Andromeda Galaxy. At almost 400 lightyears across and still growing, this shell is far bigger than a typical nova remnant (usually around a lightyear in size) and even larger than most supernova remnants.

Dr Matt Darnley, lead author on the study and Reader in Time Domain Astrophysics at Liverpool John Moores University's Astrophysics Research Institute explains: “Each year ‘12a’ (as we lovingly refer to it) undergoes a thermonuclear eruption on the surface of its white dwarf. These are essentially hydrogen bombs, which eject material equivalent to about the mass of the Moon in all directions at a few thousand kilometres per second. These ejecta act like a snow plough, piling the surrounding ‘interstellar medium’ up to form the shell we observe – the outer ‘skin’ of the bubble, or the ‘super-remnant’ as we have named it.”

These new observations coupled with state-of-the-art hydrodynamic simulations (carried out at LJMU and the University of Manchester) have revealed that this vast shell is in fact the remains of not just one nova eruption but possibly millions – all from the same system.

Despite its uniqueness and staggering scale, the discovery of this super-remnant may have further significance.

Dr Matt Darnley continued: “Studying 12a and its super-remnant could help is to understand how some white dwarfs grow to their critical upper mass and how they actually explode once they gets there as a ‘Type Ia Supernova’. Type Ia supernovae are critical tools used to work out how the universe expands and grows.”

In a related work, also led by Matt Darnley, this team has predicted that 12a will ultimately explode as a Type Ia Supernova in less than 20,000 years – a very short time in cosmological terms.

Dr Rebekah Hounsell, second author on both studies and a post-doctoral researcher at the University of Pennsylvania, explains: “These are some of the largest explosions in the Universe (type Ia supernovae). Such an event in the Andromeda galaxy (M31) would be one of the closest supernovae observed by telescopes (the last one in M31 was in 1885 and in the Large Magellanic Cloud in 1987). The last one in our own galaxy (that we actually saw) was 1604. Although we’ve predicted that 12a will undergo a supernovae explosion in less than twenty thousand years – that sounds a long time, but of course that could still mean within the next decade or so.”