Last month the National Schools' Observatory and the Liverpool Telescope held an exhibition in the "Space Hangar" at the 2017 Royal Air Force Cosford Air Show. A news article about this event is now on the Liverpool John Moores University news site, which features a great video shot by LJMU's press office, which is also shown above. Click here to go to the article "Tales from the Liverpool Telescope". 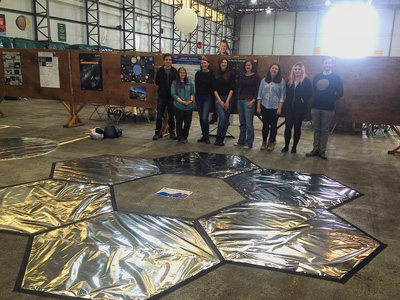 ARI staff with a mockup of the LT2 primary mirror. © 2017 Helen Jermak

The exhibit featured scale models of the LT, plus its proposed 4 metre diameter successor Liverpool Telescope 2 (LT2). The size of the venue also allowed full-size mockups of LT and LT2 primary mirrors to be constructed, to give the public a very real impression of the size of professional telescope optics.