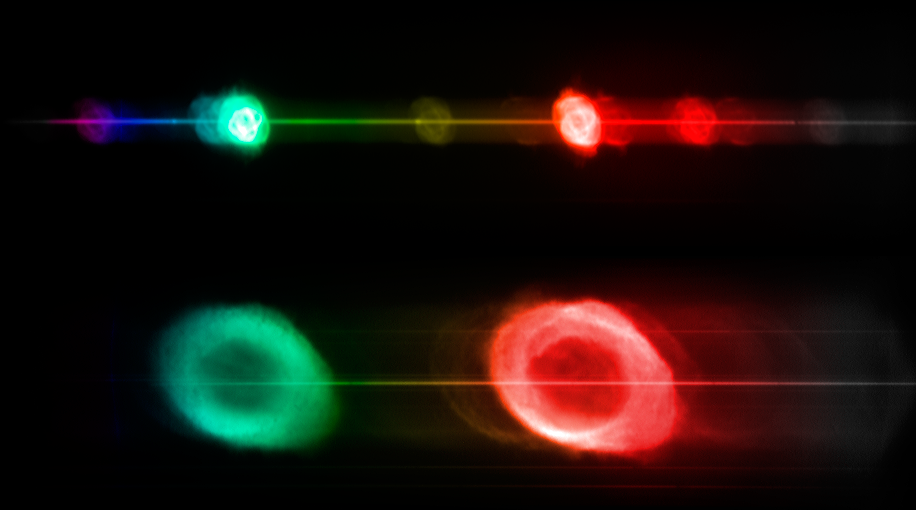 Robert Smith's "Iridis" image of the Cat's Eye Nebula (featured in full here) has inspired an article on the Liverpool John Moores University (LJMU) main website about the more general concept of science as art, and art as science.

The image won the Robotic Scope Special Prize at the Insight Astronomy Photographer of the Year 2016. It was taken with the Liverpool Telescope's SPRAT spectrograph in slitless mode, so the light from the nebula was split into its constituent colours without first passing through a slit. As the nebula shines only in discrete colours, just a few individual images of the nebula can be seen, instead of a continuous spread from blue through to red.

Smith says: “We often hear about the idea of representing scientific data in an appealing way as an expression of art, but why not look at it the other way around; ‘art as science’? Astrophotography is not just a matter of making science look pretty, it shows us that beauty actually is science. The winners of this competition were obviously selected because they were beautiful, striking or interesting, but each and every one is also an expression of astrophysical processes and could be the basis of a science seminar in their own right. It is physics that creates that beauty. Looking at the swirling gas in a nebula or the aurorae, you are literally seeing maths and physics.”