Planck and Herschel imaged by LT 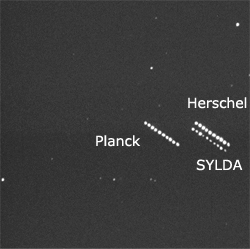 Stack of ten frames taken by the LT showing Planck, Herschel and SYLDA receding from Earth. Motion is from bottom right to upper left (click for bigger (532KB)). © 2009 the LT project.

The LT has taken images of the Planck and Herschel spacecraft around 00:20 UTC 15th May 2009, some 11 hours after launch, when the pair were more than 120,000 km from the Earth. The spacecraft were recently launched from the ESA Spaceport in Kourou, French Guiana at 13:12 UTC 14th May 2009, and are now on their way to the L2 langrange point 1.5 million kilometres from the Earth, over four times further away than the moon, which they should reach around the end of June. For more information on the missions, click here for Herschel and here for Planck.

The spacecraft were launched on the same Ariane 5 rocket, only separating during the final burn to put them in slightly different trajectories to L2. As a consequence, Planck and Herschel were still relatively close to each other when the images were taken and were both comfortably within the 4.5 arcminute field of view of RATCam.

The images show a third body, the inert SYLDA 5 structure which supported the two spacecraft while in the payload shroud of the rocket. Its changing brightness during the imaging sequence implies it is tumbling, unlike the spacecraft which are stabilised in flight.