On Monday 2 May 2005 a team of UK astronomers from Liverpool John Moores University discovered the optical light, or afterglow, from a Gamma Ray Burst (GRB) just three minutes after the vast explosion of highly energetic gamma rays that were caught by the gamma ray satellite, Integral.

The most exciting aspect of the Liverpool team's discovery was that the entire process of detection, identification and intensive followup monitoring was carried out automatically with no human intervention. This was possible thanks to the fully robotic nature of the telescope, and the sophisticated object identification software developed by the team.

"This discovery demonstrates that a whole new era of automatic rapid-response followups are now possible with robotic telescopes like the Liverpool Telescope" said Dr Carole Mundell.

Gamma ray bursts are the most luminous transient objects in the universe. They are thought to be caused when a massive star in a distant galaxy reaches the end of its life, collapsing to form a black hole, and in the process, ejecting a jet of material at ultra-high velocities.

The so-called optical afterglow is thought to originate from light emitted when this material crashes into the gas surrounding the star. In the first few minutes, after the initial burst of gamma rays, the optical and infrared light carries the clue to the origin of these catastrophic explosions but has been difficult to capture with traditional telescopes.

Says Mundell, "It is absolutely critical that the light from Gamma Ray Bursts is caught at the earliest possible time and then intensely monitored before it fades away. One cannot afford to waste critical minutes waiting for a human to respond, and this is why the Liverpool Telescope is ideally suited to catch this early light automatically, and probe the physics of these objects at the earliest possible times." 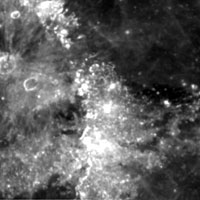 After just 6 months of operation, the National Schools' Observatory (NSO) has received its 2000th request for observations with the Liverpool Telescope. This observation of craters on the Moon (right) was requested by The Grove school in East Sussex.

A rare, dramatic outburst by the "Blazar" 3C454.3 is being studied by schools. The outburst is being observed by the Liverpool Telescope as part of a scientific programme led by Prof. Ian McHardy of Southampton University. Because of the exciting nature of the outburst, Prof. McHardy has made the observations available to schools to study for themselves through the NSO.

Apart from webcam images, the Live Data page now contains just that - live data. This information is brought over from the telescope site on La Palma every minute and presented on the display, which is designed for easy at-a-glance reading. A glossary of terms and symbols will be available shortly, but symbol explanations can also be read from the tooltips that pop up when you hover your mouse over them.